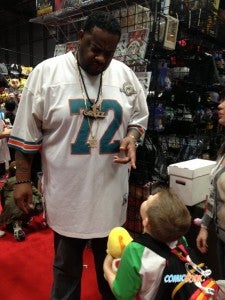 With a February 7 start date set for Community to take 30 Rock's timeslot, it means that there's just under three months to go before the award-winning sitcom is retired for good, with NBC having announced over the summer that this year's seventh season would be 30 Rock's last. With the holidays between here and there, the vernerable series' days are numbered, with a single-digit number of episodes yet to be aired. And while nobody doubts the ability of Tina Fey, Alec Baldwin and Tracy Morgan to walk off the soundstage and land their next big gig, the large and beloved ensemble cast is starting to face those questions: "What's next?" For Scott Adsit, who plays Pete Hornberger, the answer is that he's playing a S.H.I.E.L.D. Agent. Not in the TV series, mind you, but in Brian Posehn, Gerry Duggan and Tony Moore's run on Deadpool, which started this week. Other members of the cast are going on stand-up tours or heading to features--but we caught up with Grizz Chapman, one half of the "Grizz and Dot Com" duo on the show, at New York Comic Con last month and he said that he's sticking with TV, but that doesn't mean he's not working while he waits for the next series. You've got the Lair in the Bronx; is that how you come to Comic Con, as an exhibitor, or is it mostly that you're a fan first and this is some extra scratch? Oh, definitely fan first. I'm a big nerd at heart and it feels good to come to a place where you can just about do anything and it's accepted. I've been doing this for years--Comic-Con, definitely Comic-Con first. But the store is a nice plus. We've got a store in MarsPark, check it out. We've got anything and everything. You are obviously best known for 30 Rock--that's wrapping up this year, so what do you want to do next? I just completed three films--one is called The Home, one is called Lucky Numbers and one is called Hybrid Beast. I definitely want to go back into television; I think that's my first love right now. I'd do a little more TV and then branch off into movies later on. I definitely want to stay in comedy--I think that's where I'm strongest, is in comedy. For a big guy, and for an African-American guy, a lot of the roles that are out there are really over-the-top, with a lot of physical comedy. You've done a pretty good job of steering clear of that for the most part on 30 Rock and having a bit more range. I've made my claim to fame off facial expressions, and that's one thing you can't teach becuase it's all about timing. I'm prepared to break that mold, because a lot of people have paved the way before me. Take the great Michael Clarke Duncan; he came from being a bodyguard and moved to acting. So if he can do it, and he can change the outlook on that particular role and that perspective on the big guy, I can do the same thing. I'm seven foot, 420 pounds, but I'm pleasant and easy to work with--I remember my lines, and we get it done. You can't teach that. Comedy's your first love; it sounds to me from those titles that you're branching out from that, too. Is that a matter of just trying buffet-style or is it a question of what job is available? I'm doing a little bit of everything. I'm really excited about showing a different side of Grizz, that I didn't get a chance to do during 30 Rock. And 30 Rock gave me such an incredible opportunity but by the same token, there are sixteen, seventeen people on the cast. So screen time is really, really limited. But again, it was a wonderful experience and I wouldn't trade it for the world. I've learned from the best in the business and I'm going to take what I've learned from Alec [Baldwin], Tina [Fey], Tracy [Morgan], and take it to the next level. I think it's interesting that because everyone was kind of cast as a caricature of themselves, everybody has to worry a little bit about being typecast as their character from the show, right? Well, the thing about this business is that your skill speaks for itself. If I can't get that role, I'll create my own. I'm a firm believer that in this business if you go out there and you can't find a role, you've got to create your own. So that was one of the reasons why I created--well, I didn't create Grizz Chroniclez; it was a joint effort by me and two of my classmates. But we started up Grizz Chroniclez and we're going to take that and just show a little different side. It's still basically a comedy but you'll see that there's some drama in it, and a little suspense, and we've got a bunch of stuff coming up. I just pitched a show, to a network I can't mention right now, but that's going to be fun, too. And one last thing, because we're doing this at Comic-Con: if you could play any superhero, who would you play? Power Fist. Definitely Power Fist.

30 Rock's Grizz Chapman Braces for the End, Prepares for His Next Step