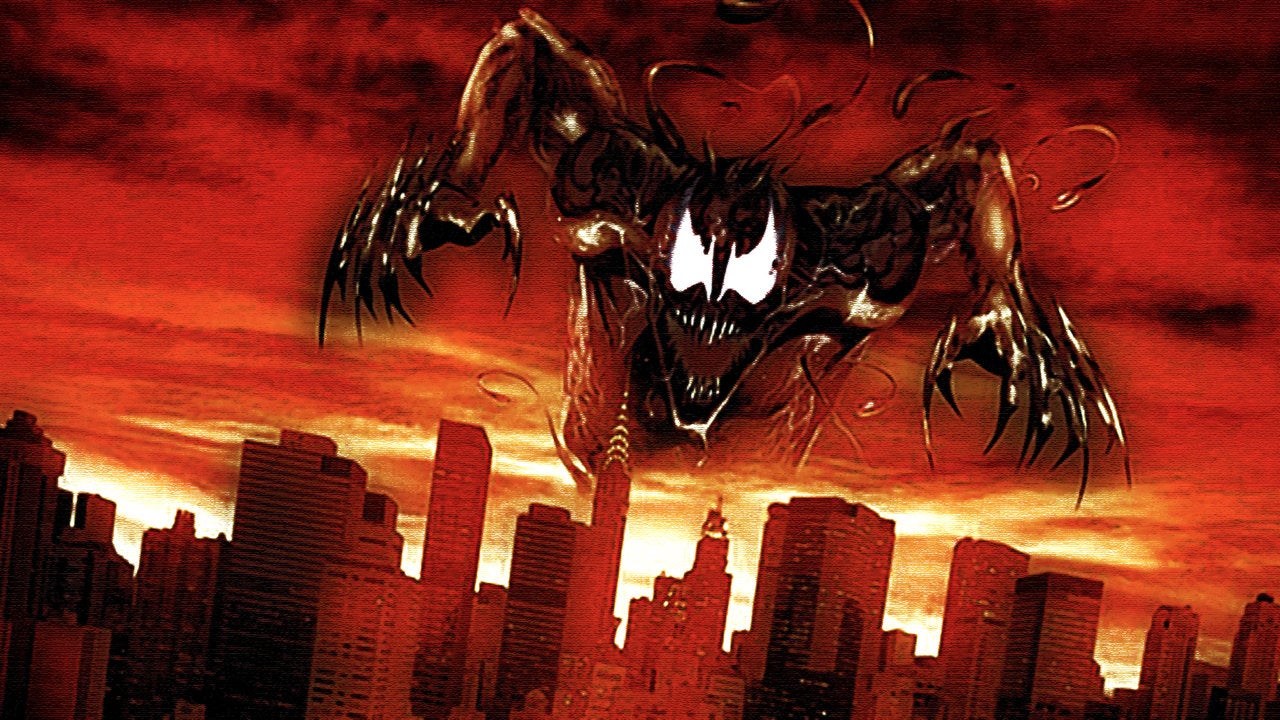 Today, Marvel publishes the first issue of its Axis: Carnage miniseries, a spinoff of the larger, company-wide Avengers & X-Men: Axis event. Central to the event's plot is the "Inversion," which has "realigned the moral compass" for a number of iconic characters including Loki and Magneto, and more surprisingly, long-time villains Hobgoblin and Carnage.

Carnage, who was first introduced in the pages of Amazing Spider-Man in the early 1990s, has been one of the most uncomplicatedly evil villains in Spidey's famed rogue's gallery. The sadistic marriage of a bloodthirsty alien symbiote and a serial killer named Cletus Kasady, Carnage has always been portrayed as an unrepentant murderer who kills for the fun of it. And yet the Inversion is expected to change that – or at least some of that.

If Carnage has at least toned down some of his insidious behavior, then it almost feels like an end of a era – and a moment that's worth marking down. Carnage might not be the most nuanced villain in Marvel Comics history, but he certainly has his fans (how many comic book characters have a red Super Nintendo cartridge with their likeness on it?). As such, if Carnage is truly "inverted," then let's take a stroll down memory lane and celebrate the five tropes and themes you are almost always guaranteed to find in a Carnage story 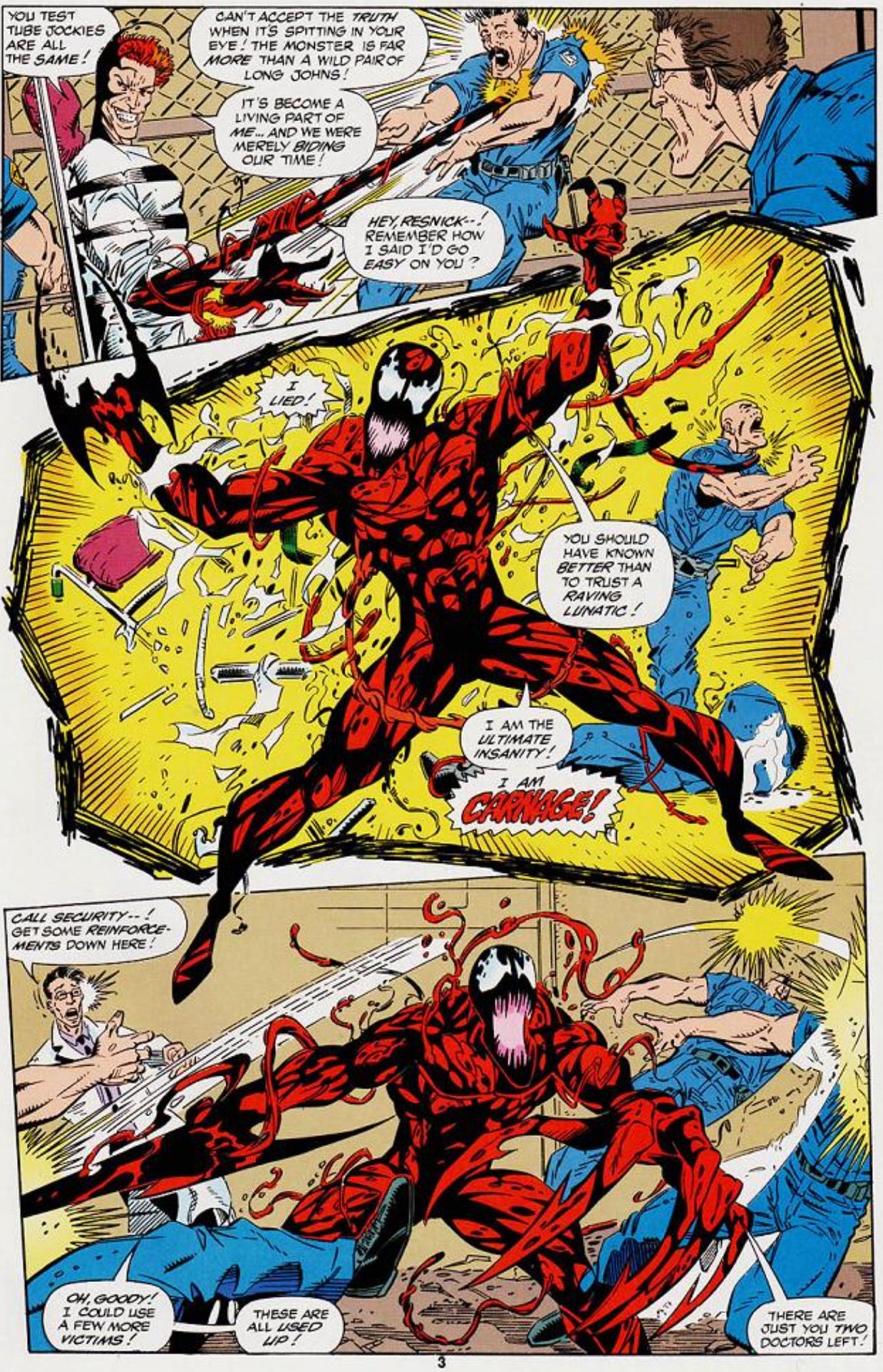 Probably the easiest common denominator to spot when it comes to a Carnage story; this is a character who likes to kill and kill in mass quantities. And that makes sense since, prior to bonding with the alien symbiote, Carnage was convicted serial killer Cletus Kasady, a guy with serious mommy and daddy issues that even Eddie Brock/Venom thought was a bit of a loon when they were locked up together. In fact, one of the major distinguishing features between Marvel's two super-powered symbiotes is that Venom – even after threatening to eat Spider-Man's brains – has always had some semblance of a moral code (he would not kill "innocents" unless they were protecting Spidey or preventing him from killing the Wall Crawler), while Carnage never blushes about killing people (innocents or otherwise) indiscriminately.

That's because the entire premise of Carnage's character is that he personifies what might happen when a remorseless serial killer like Kasady is given such extreme, unstoppable power: he is able to act upon every single one of his violent fantasies like Freddy Krueger on cosmic-powered steroids. Some of the most popular Carnage stories, like "Maximum Carnage" and Carnage USA, are notorious for their excessively high body counts. So if you're reading a Carnage book, even one where he supposedly is reforming, a trail of blood and guts is to be expected. 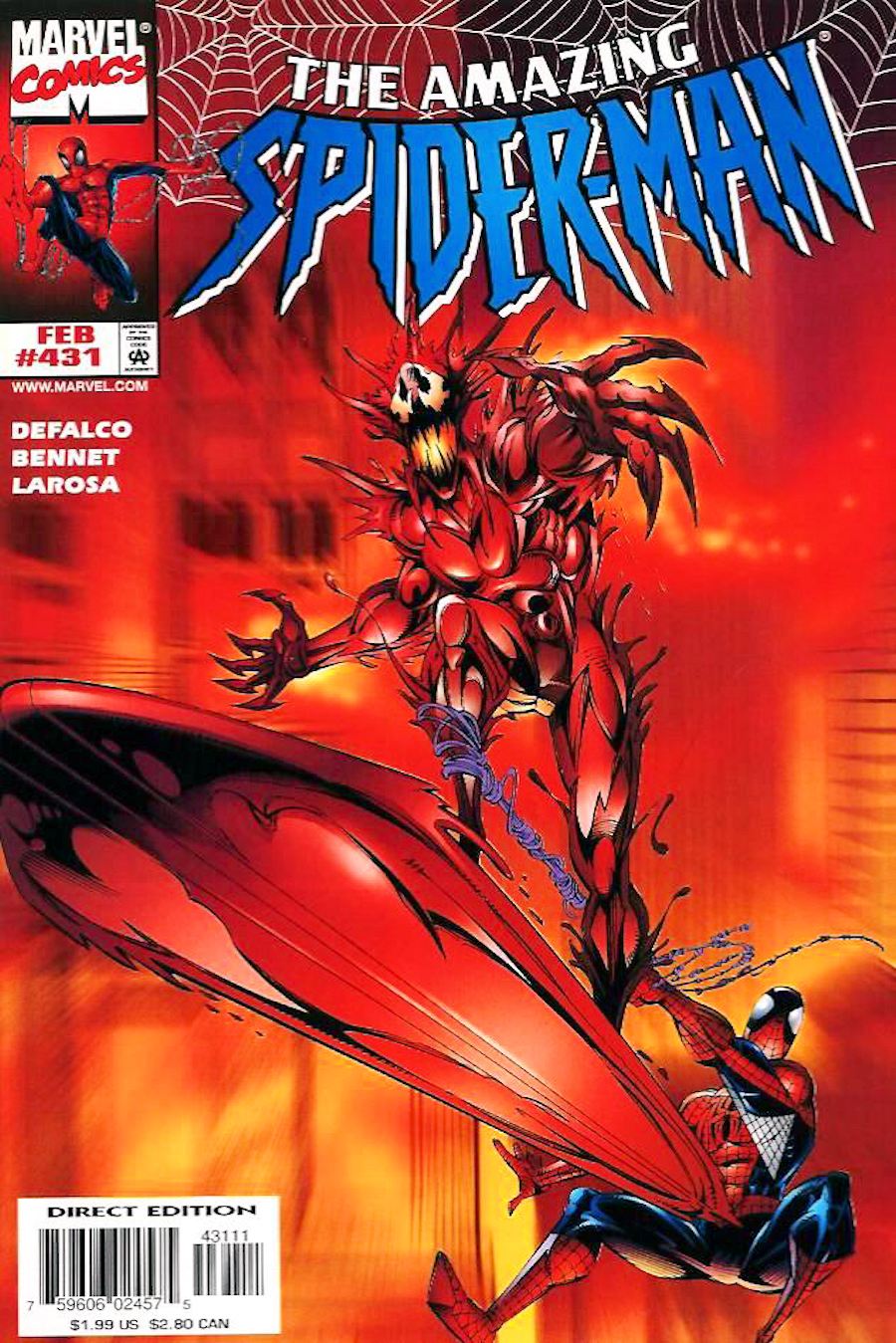 A characteristic of the alien symbiote, even dating back to the days when Spider-Man was returning from Battleworld with a strange black goo making up his costume, is that the thing likes to possess people. And it especially has a penchant for bonding to individuals and cosmic entities that are stronger than its current host. Even after Spider-Man rejected it, the Venom symbiote would love to toy with Eddie Brock's emotions and attempt to leave him for Peter Parker. During the Carnage era, the symbiote once made a play for Peter's clone, Ben Reilly, during the latter half of the "Clone Saga" arc.

Over the years, the Carnage symbiote would continually up the stakes in who it bonded to in order to create dramatically intense storylines (if not a little farfetched). In Amazing Spider-Man #430-431, the symbiote gets a taste of the Power Cosmic when it possesses the Silver Surfer. In later stories, when the symbiote wasn't trying to create additional spawn (like in Venom vs. Carnage), it possessed other heroes, like the entire Avengers team in Carnage USA. That little alien certainly likes to get around. 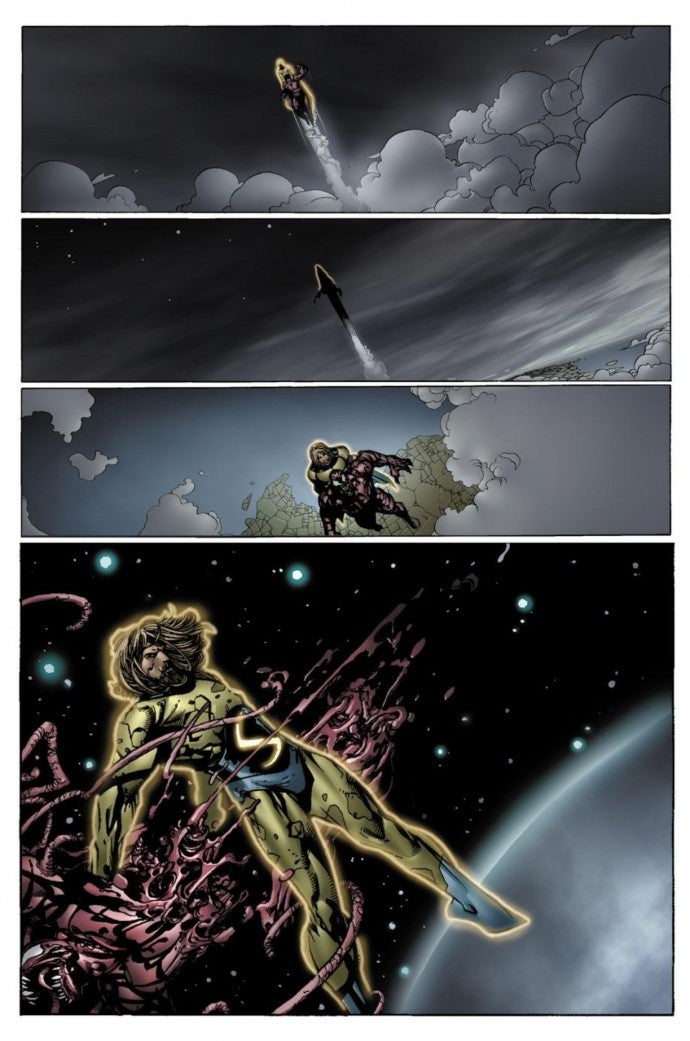 3. The Symbiote Always Gets Back to Kasady

Like any good horror movie villain, Carnage always finds a way back to its original host, Cletus Kasady, regardless of how ridiculous the circumstances might appear to be. Sure, the first few times this happened it made sense. In those instances, Kasady would be separated from the alien via sonic waves or fire and then inevitably there would be some kind of superpowered jail break at Ravencroft Institute and Carnage and Kasady would be out there singing "Up Where We Belong" while slaughtering a bunch of helpless guards.

But the Carnage/Kasady reunions starting to become more and more incredulous following Brian Michael Bendis's inaugural arc on New Avengers in the mid-2000s. At that point, Bendis, in a not so subtle gesture, had Sentry fly up into space with Kasady and Carnage and rip him into two. There would be no surviving that, right?

Wrong. In the Zeb Wells/Clayton Crain Carnage miniseries in 2010, we discover that remnants of the symbiote were salvaged from space by an evil scientist. And of course, Kasady managed to survive getting his body ripped in half in space. So Carnage returned. Two years later, Kasady received a full lobotomy courtesy of Spidey's deranged clone Kaine. Did that kill him for good? Of course not. In Superior Carnage, the symbiote spends the bulk of the mini adhering to more intelligent hosts like the Wizard, only to finally reunite with Kasady and repair his brain damage.

But sure, next time Carnage looks to be a dead alien, go ahead and believe it. 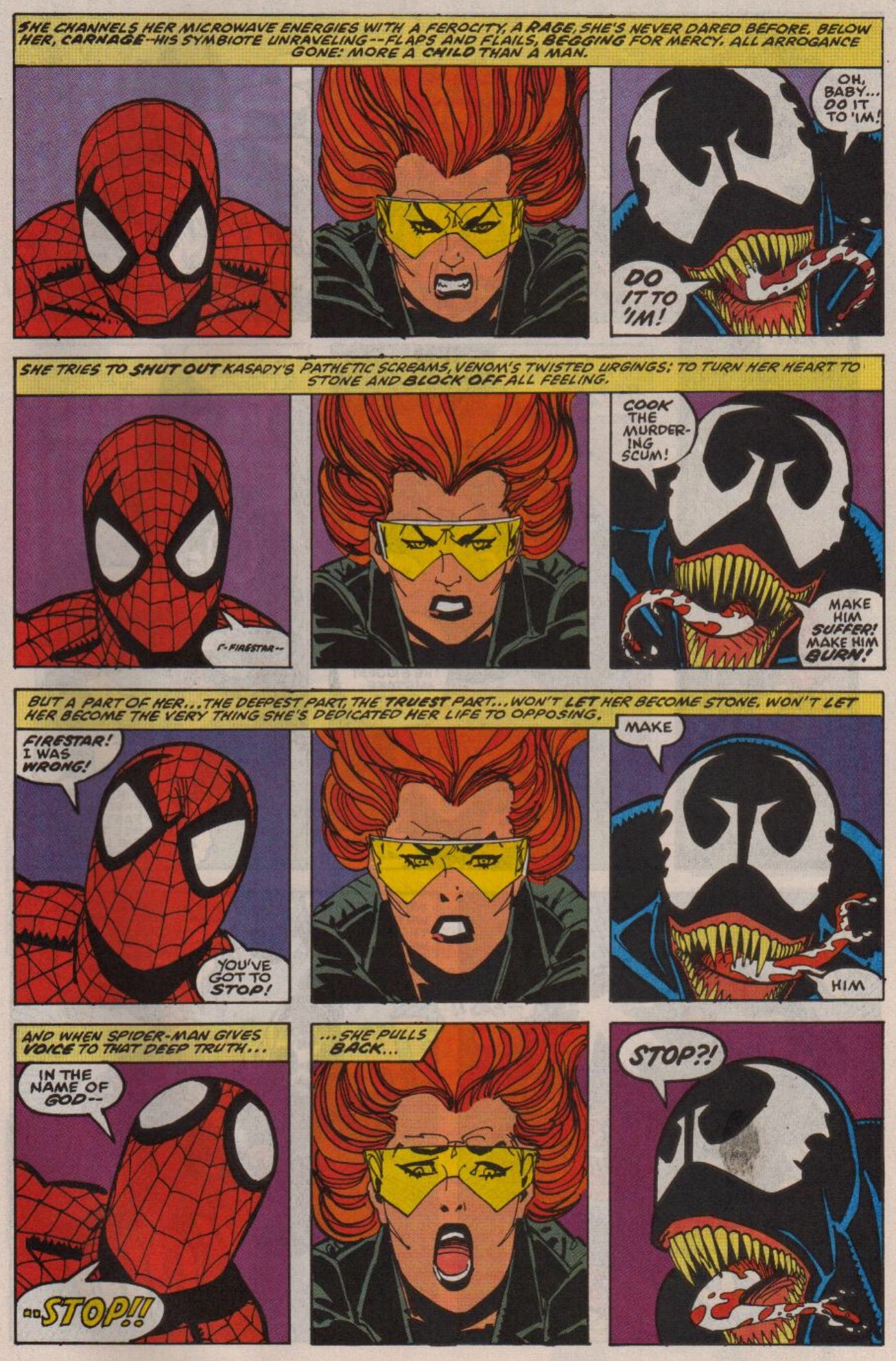 Spider-Man is one of the few superheroes who still maintains a pretty clear moral code that includes not killing his adversaries. Sure, he's accidentally or unintentionally killed a few years over the years, but when given the option, even when the villain is so despicable and deserving (think Green Goblin murdering his girlfriend, Gwen Stacy), Spidey always goes the "thou shall not kill" route.

Carnage is one of the only villains that gives Spidey pause when it comes to his moral code, in large part because Carnage is such an indiscriminately homicidal maniac that he forces Spider-Man to contemplate whether or not the ends justify the means. In other words, is it worth protecting one madman when the tradeoff is the potential loss of hundreds of innocent lives? This moral dilemma is best on display during the "Maximum Carnage" storyline when Spidey teams-up with a wide range of personalities including Venom, Cloak and Dagger, Black Cat, Morbius and Deathlok, who happen to see the world in grayer shades than Spidey. Even the harder-edged Superior Spider-Man opted to have the symbiote re-bond to his original psychotic host, Cletus Kasady, rather than destroy it, in order to save the life of his friend (as Doctor Octopus), the Wizard. 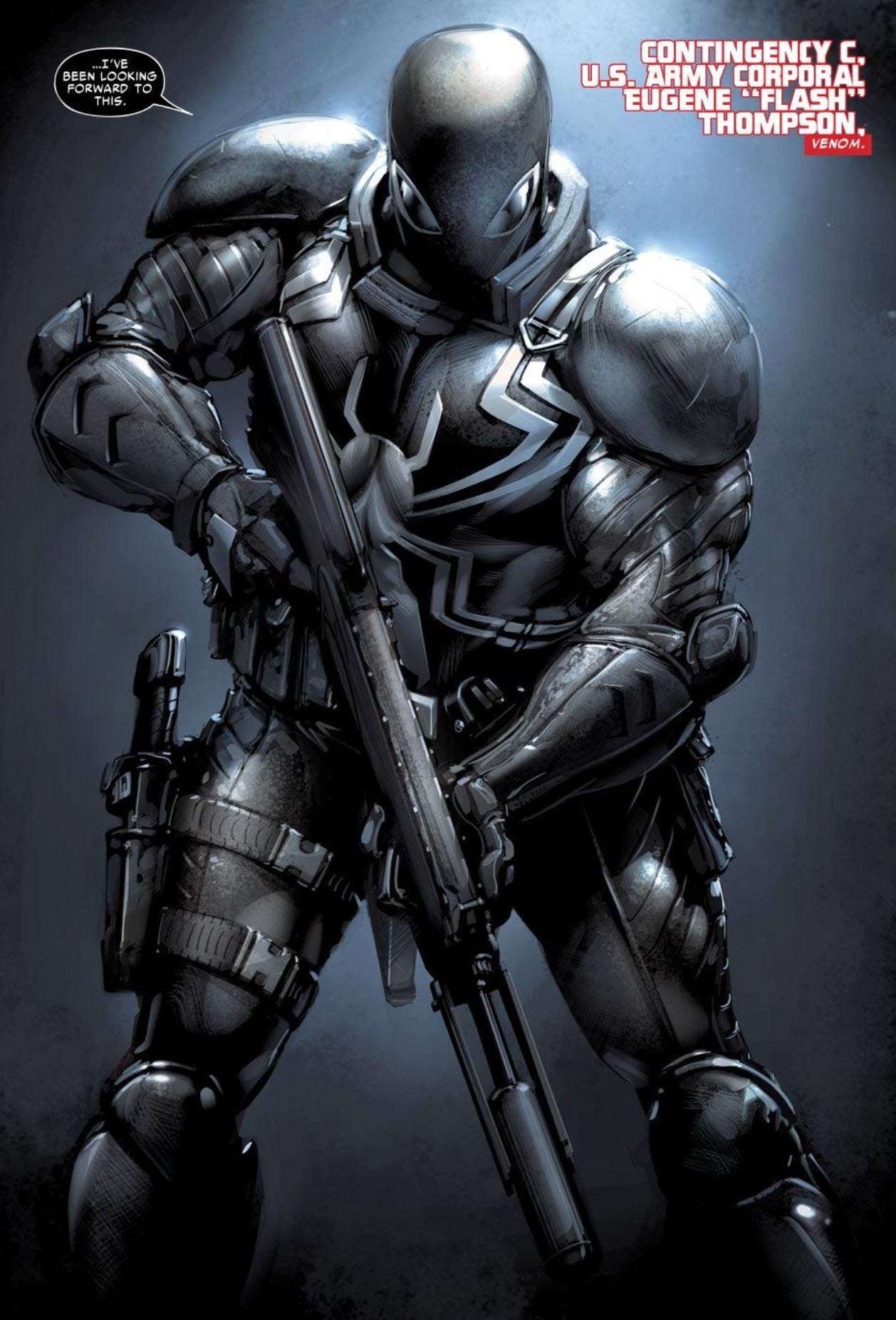 Being that Carnage is Venom's spawn, a father and son reunion is almost always guaranteed in a Carnage story (with a few notable exceptions). This trend dates back to the very first Carnage arc in Amazing Spider-Man #361-363, when Spidey actually returns to a deserted island to recruit Eddie Brock/Venom in his battle against Carnage. Of course, having someone with Brock's – ahem – mentality on his side has always created additional conflict in Spider-Man's life (see entry No. 2). As a result, by the end of these stories, Spider-Man tends to be at odds with both Venom and Carnage. And in 2004's Venom vs. Carnage miniseries, the two adversarial symbiotes even align with each other to defeat the spawn of Carnage, Toxin.

But Venom's inclusion goes beyond Eddie Brock. In more recent years, Flash Thompson, who operates as Agent Venom (a tool for the US government), has played a pivotal role in some Carnage stories, including Carnage USA and the "Minimum Carnage" arc that played out across Venom and Scarlet Spider in 2012. It just goes to show that ultimately, it's the two alien symbiotes that have the relationship and the human beings that they are bonded to are just along for the ride.

5 Things You Will Find In Every Carnage Story