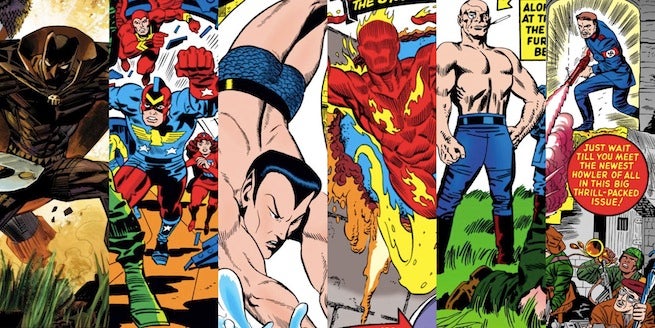 The anticipated debut of ABC's Agent Carter marks Marvel's second foray into television, while bringing the audience back to the World War II-era of comic book history for the first time since 2011's Captain America: The First Avenger.

While the series stands to bridge the gap (and keep that Tuesday night timeslot warm) until Agents of S.H.I.E.L.D. returns in March, Agent Carter also offers a tremendous amount of opportunity for Marvel Studios to connect some of its Golden Age properties with the modern Marvel movie-verse. We've already seen this happen to great effect with Peggy Carter, the Stark family and Bucky Barnes (aka, the "Winter Soldier"). But here are seven more characters that were introduced in Marvel stories  set in the 1940s (or earlier) that could be referenced in Agent Carter and ultimately connect to Agents of S.H.I.E.L.D., Avengers: Age of Ultron, and a number of other Marvel television and film propoerties that are slated to be released over the next few years. 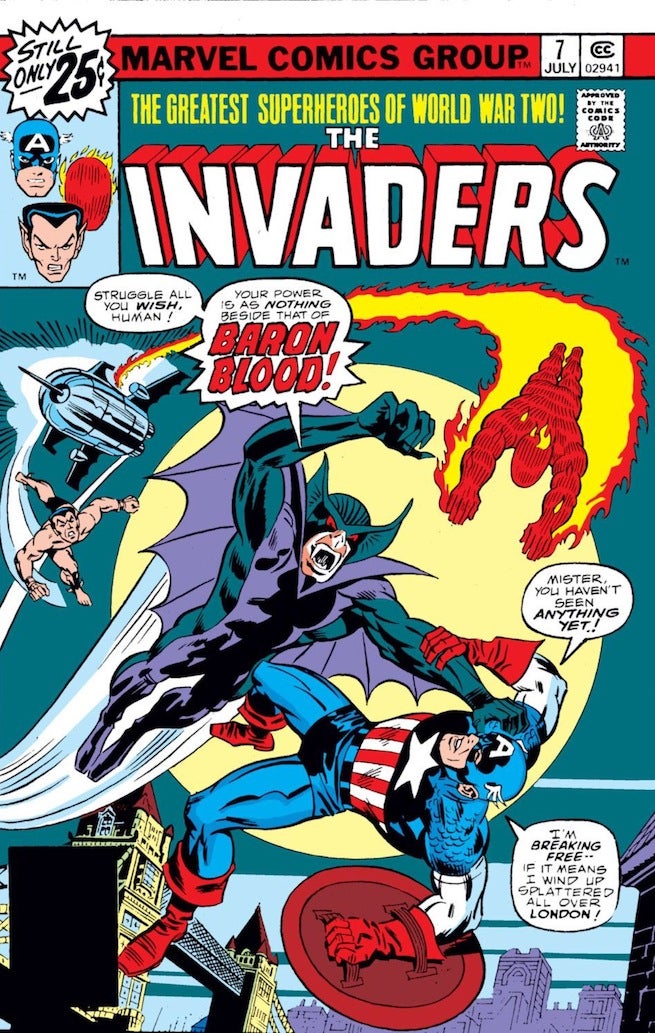 Probably a longshot for any reference in either Agent Carter or in the current Marvel Cinematic Universe, but the vampiric Baron Blood does have ties to both the World War II-era of Marvel Comics and the modern era.

First introduced in an issue of Invaders as the nemesis to the British World War I hero Union Jack, Baron Blood would go on to fight the Avengers and Captain America before disappearing. However, a new iteration of the character would be born in a 1989 issue of Doctor Strange Sorcerer Supreme when a young Strange attempts to resurrect his brother and instead brings him back as a vampire, Baron Blood. Blood is obviously a fairly deep cut Strange villain, but if the 2016 Doctor Strange film does go the more macabre route (which would also allow Marvel Studios to integrate the recently reacquired Blade universe), then a multi-generational vampire like Baron Blood is one way to link old and new. 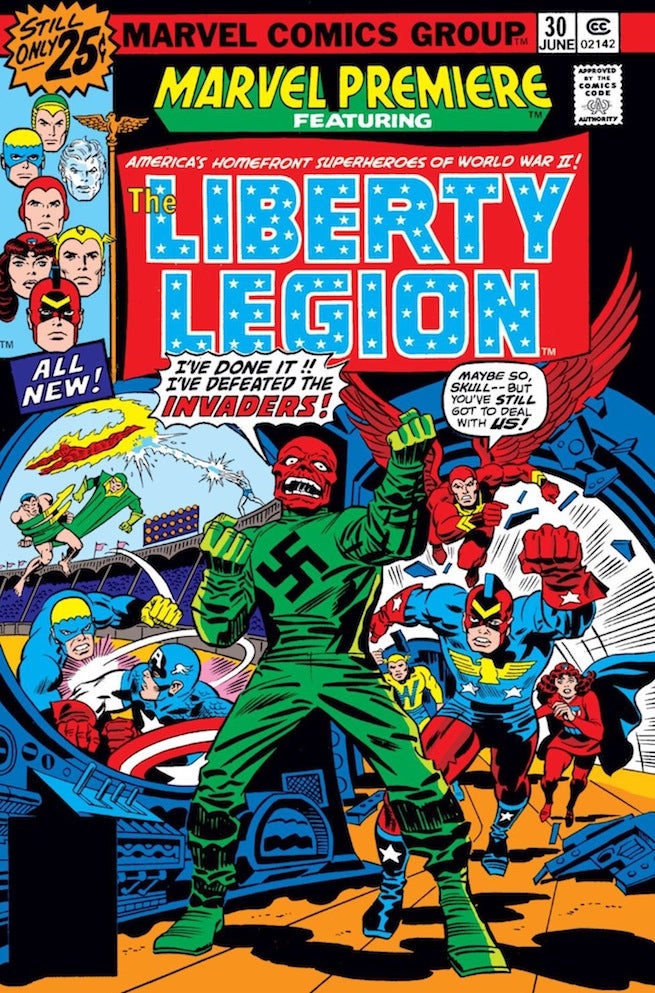 6. Whizzer and the Liberty Legion

Depending on how much Marvel Studio wishes to retcon some of its Golden Age characters (the studio hasn't been shy about retconning its modern characters like making Daisy Johnson/Skye an Inhuman in Agents of S.H.I.E.L.D.), the Liberty Legion superteam could make for an interesting introduction in Agent Carter.

The group first appeared during the 1976 run on Invaders and is an assembly of some of the Golden Age's greatest superheroes, such as Blue Diamond, Patriot and Jack Frost. Many of these characters have fantastic powers, like the Thin Man, the original stretching hero (barely predating Plastic Man) and Blue Diamond, who is super-strong and nearly indestructible. In fact, one could even say that these characters have mutant-like powers. But since mutant is a dirty word in the Marvel Cinematic Universe, maybe one would say that the Liberty Legion is practically Inhuman with its powers.

Anyway, even if you disregard the Inhuman potential (Agents of S.H.I.E.L.D. has already established their existence in the Agent Carter era vis a vis the Obelisk), one of the Liberty Legion's founding members has a very real connection to two modern characters, Scarlet Witch and Quicksilver. In the comics, Whizzer, who runs extraordinarily fast, believes himself to be the father of the Maximoff twins before it was later revealed that the mutant Magneto is their father (which was then retconned in Axis). 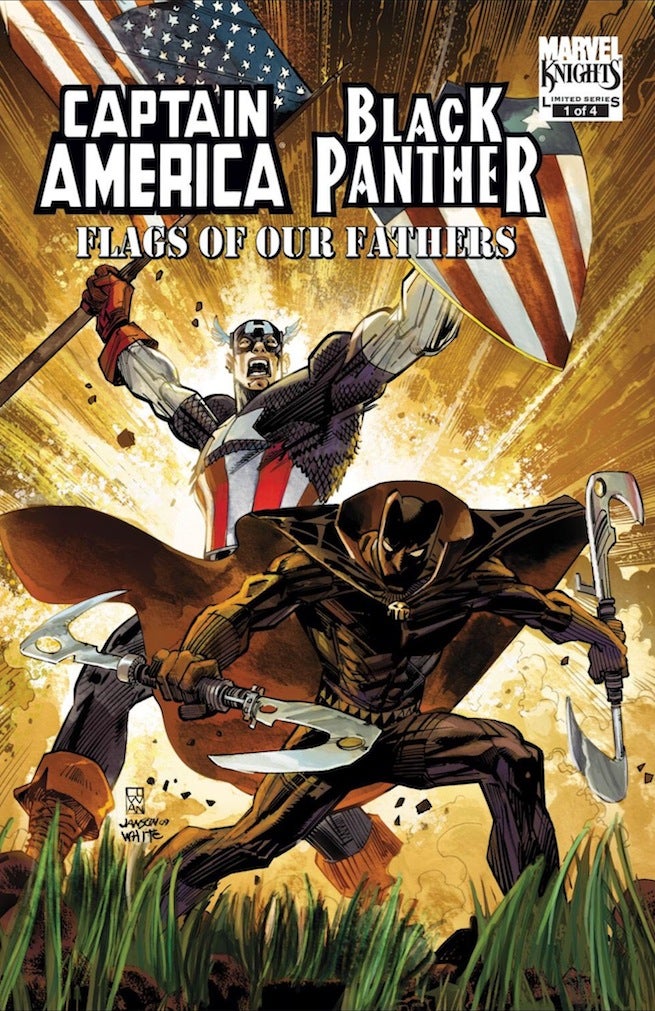 The 2010 miniseries, Black Panther/Captain America: Flags of Our Fathers by Reginald Hudlin, retroactively depicts Captain America's very first encounter with the African nation of Wakanda and its leader, the Black Panther. In this instance, Cap meets Azzuri and T'Chaka, the grandfather and father (respectively) of the current Black Panther (and the star of his own film in the near future) T'Challa. However, similar to how Agents of S.H.I.E.L.D. spent the first half of its season building towards a revelation related to the City of Attilan and the Inhumans, Agent Carter could center elements of its narrative around Wakanda and the T'Challa family tree. As the home of the world's largest supply of virbanium (which is used to construct Captain America's shield), Wakanda has historically drawn the attention of heroes and villains alike. And considering how inventor/industrialist extraordinaire Howard Stark is a part of Agent Carter's cast of characters, a Wakanda/Black Panther connection is right there for the taking (which, in turn, could help tease the rumored Black Panther cameo in Avengers: Age of Ultron). 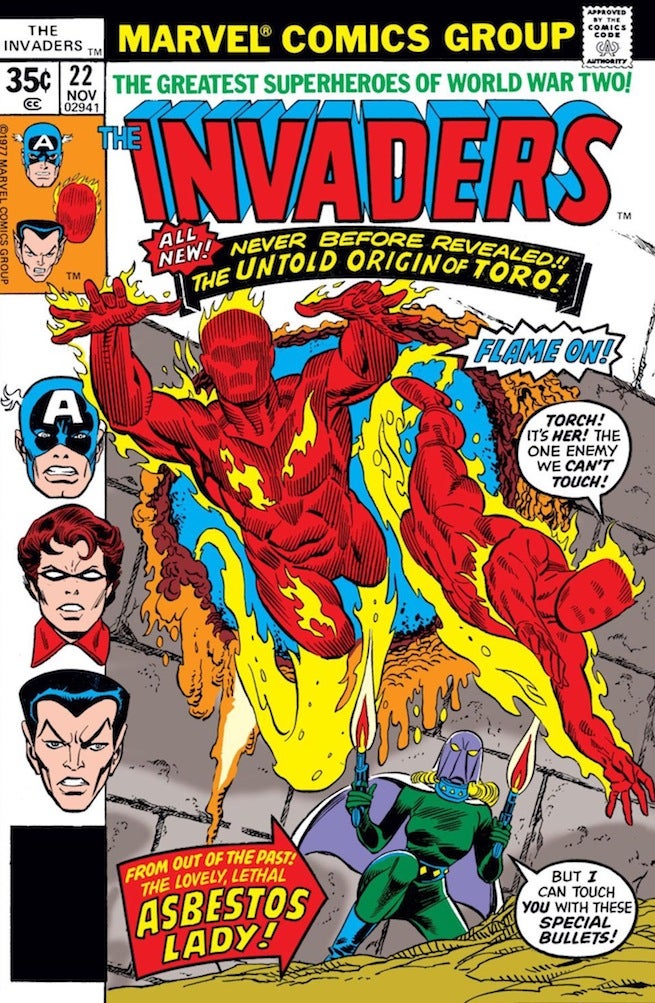 No, not the cocky hothead (and Fox Studios property) Johnny Storm of Fantastic Four fame, but instead Jim Hammond, an android who debuted in Marvel Comics #1 in 1939, making him one of Marvel's very first heroes. Torch already made a cameo of sorts in 2011's Captain America: The First Avenger as part of the Stark Expo, but as Marvel continues to grow its cinematic universe, there are a number of ways to work the character for a few additional appearances in the MCU.

While the comic book version of Human Torch fell into relative obscurity during the 1950s, and Hammond was all but forgotten by the time the Fantastic Four rolled around in 1961, the character experienced a significant revival in the mid-70s as part of the Invaders series – a flashback book starring Captain America, Bucky, Hammond and Namor the Sub-Mariner during World War II. Since the Invaders launched, Hammond has continued to make appearances in various series and storylines, including the recent All-New Invaders series by James Robinson.

Additionally, Hammond is closely connected to another famous Marvel android that is making his big screen debut this summer. According to a 1975 Avengers story by Steve Englehart (which has since been retconned away), Ultron reactivated Hammond's android body to create the Vision. Marvel has been fairly tight-lipped about how the Vision's fits in to Avengers: Age of Ultron but if they want to connect the Agent Carter era with the modern day cinematic universe, the Hammond/Vision storyline is one way to do it. 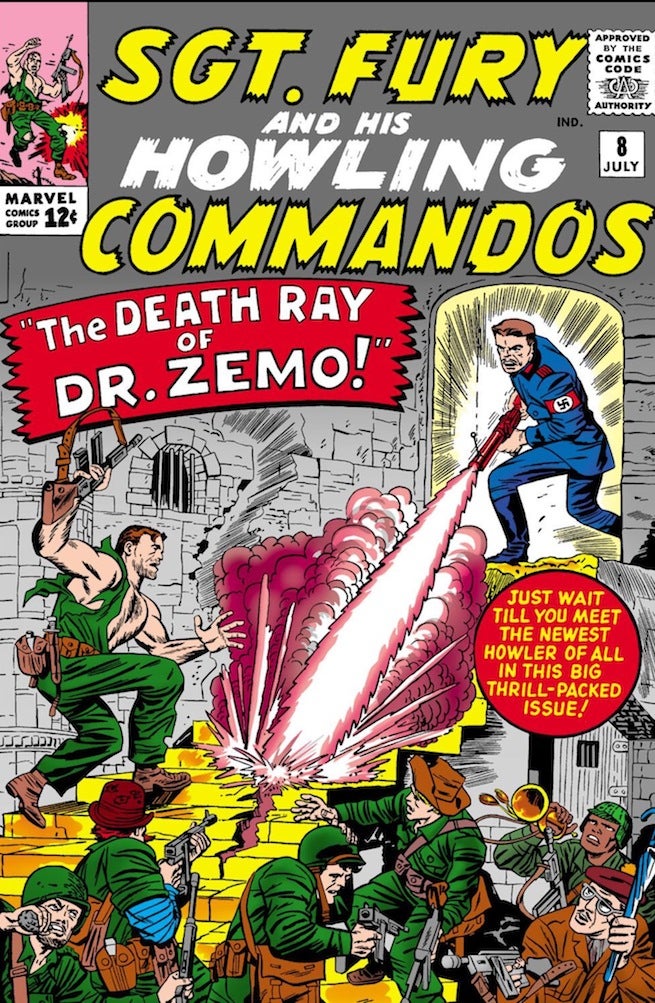 The Zemo family's legacy of evil in the Marvel Universe dates back to the Agent Carter era and continues into the modern Marvel movie-verse.

The original Zemo was first named in Avengers #6 and in an issue of Sgt. Fury and His Howling Commandoes in 1964. It would later be revealed that Zemo was the villain who rigged Captain America and Bucky's plane to explode during World War II, presumably killing both characters (except Cap would be frozen in ice while Bucky would be reanimated as a KGB assassin). When Zemo resurfaced during the Silver Age, it was as the leader of the original Masters of Evil stable, squaring off against Cap and the Avengers.

Zemo was inadvertantly killed by an errant laser blast in Avengers #15. However, his son, Baron Helmut Zemo, continued the tradition of tormenting Cap and the Avengers, his masterstroke being as the leader of a new Masters of Evil who took over Avengers Mansion in the iconic "Under Siege" storyline. "Under Siege" is considered by many Avengers fans to be one of the greatest arcs ever and it would be a shame if the storyline wasn't somehow honored on the big screen at some point in the future. 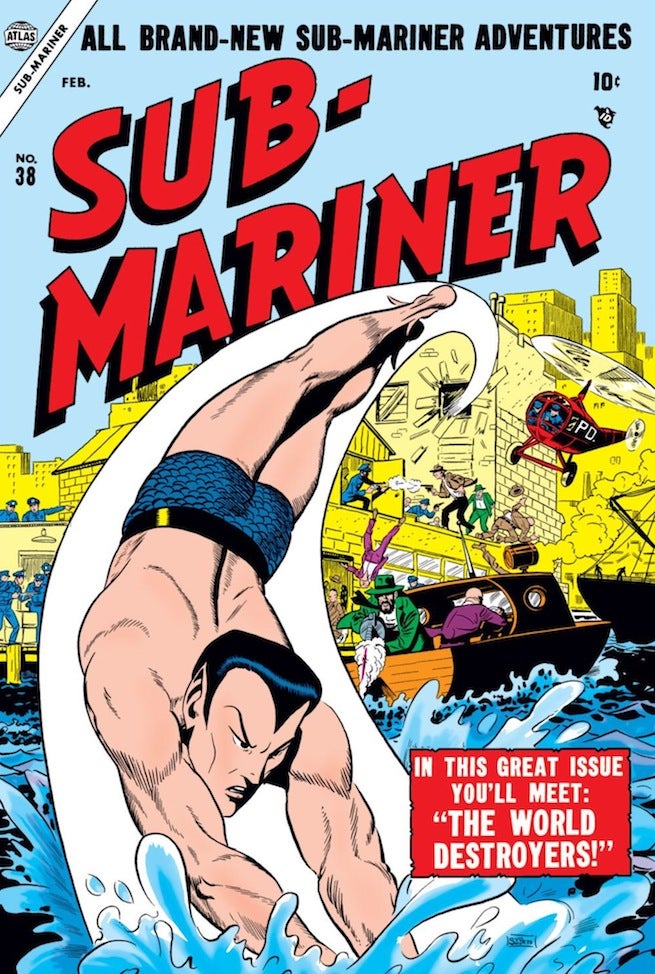 Like Human Torch, Namor is one of the original Marvel characters, first appearing in Marvel Comics #1. Since then, the arrogant Namor has played a critical role in storylines involving the Avengers, X-Men and Fantastic Four, and was also a part of the World War II-era Invaders team. With ties to so many Marvel characters, it's a bit surprising that Namor is still waiting to make his big screen debut, though a path to making that happen might be finally clearing. While there's been some debate as to whether or not Namor is technically owned by another studio (Universal often gets linked to the character), Marvel Studios head Kevin Feige recently confirmed that Marvel essentially owns Namor's right – with a few complications that could be overcome if need be. It's also worth noting that some concept art from Captain America: The First Avenger teased  Namor's homeworld, Atlantic, at the Stark Expo.

Namor is essentially an ageless character, which means he and Atlantis could very easily be referenced in Agent Carter with a full appearance coming at a later date as part of some MCU production – maybe even Captain America: Civil War, if Marvel Studios borrows elements of the Illuminati storyline in Jonathan Hickman's New Avengers. 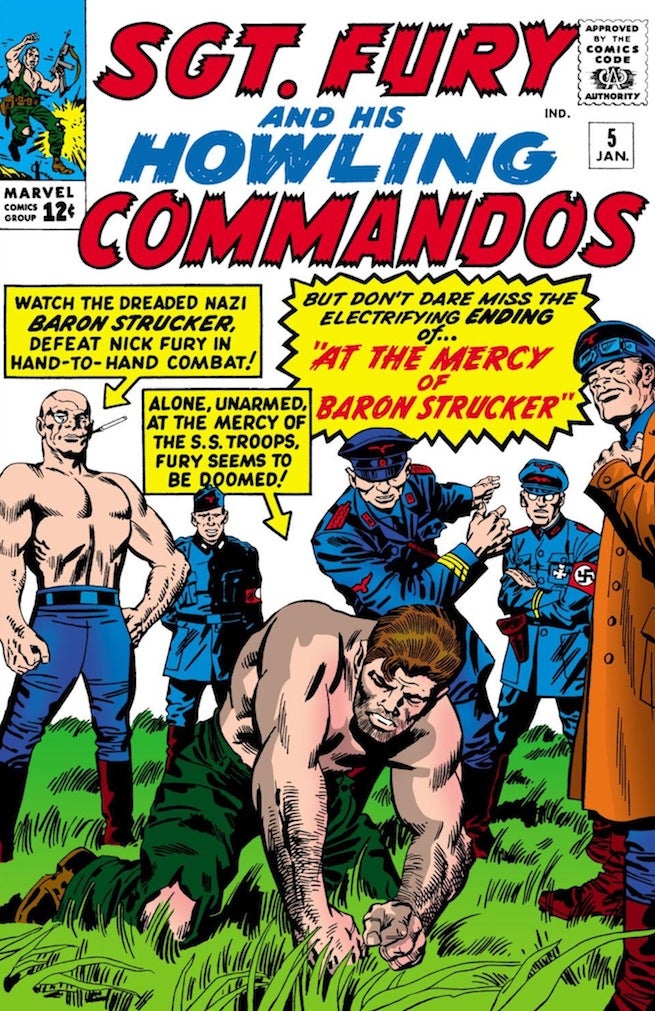 We already know that the original Hydra Supreme Leader, Baron von Strucker is going to appear in Avengers: Age of Ultron. However, Agent Carter would be a perfect way to introduce this character, who first appeared in the comics as the arch nemesis to Sgt. Nick Fury in the World War II drama Sgt. Fury and His Howling Commandoes. There are some obvious complications regarding Strucker's age if he were to appear in Agent Carter, but as we witnessed with Daniel Whitehall's character in Agents of S.H.I.E.L.D. last Fall, there are always ways around such trifles.

Regardless of how Marvel wants to characterize Strucker, it just makes too much sense for him to be teased in the MCU in some fashion in advance of Age of Ultron. Maybe the character is referenced (but never shown) in Agent Carter and then he makes a cameo in the season two finale of Agents of S.H.I.E.L.D., setting the stage for his inevitable showdown with Captain America, Iron Man, Thor and co. in Age of Ultron.