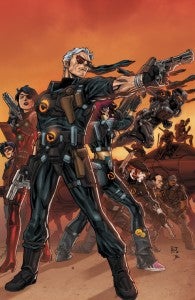 DC Comics, as many fans know by now, has brought Nielsen (the country's most well-known and popular ratings and survey organization) aboard to help them get a feel for reader response to the New 52. There have been a number of responses by fans and the press, including a temper tantrum by comedian Patton Oswalt, who threatened to stop reading DC comics altogether. Of course, he also threatened to stop reading DC comics altogether shortly after the New 52 was announced, so take all of that with a grain of salt. I've wondered since I heard about it what Nielsen might learn with this survey, and this morning I may have inadvertently gotten a little peek into exactly the kind of consumer DC is hoping to attract with this initiative. "I caved and bought one of the New 52 issues," said my brother-in-law in an unexpected text message this morning. He's in his mid-twenties, a professional with a good job in IT and a preschool daughter who adores Spider-Man. He's bought and enjoyed titles like John Constantine, Hellblazer and Y: The Last Man in the past, but is not somone who would consider himself a "comic book reader." Of course he, along with everyone else in my general vicinity, has known about The New 52 since May or June and hasn't really expressed a previous interest in checking out the comics. So what title, I asked him, did he buy and why? It turns out that after seeing a preview on the G4 website, he thought Blackhawks looked cool, and so he bought it digitally. What did he think? "I liked the first issue, but they're so short it's hard to tell," he said. Of course, as someone who hasn't read comics regularly before (and who reads the ones he does in collected editions), 20 comic pages does seem pretty small. But, unlike most comics readers, price point didn't bother him. I related to him that digital is still evolving and that most readers see the day-and-date pricing as a major concession to the direct market, which will likely change. Of the $2.99 price tag on a 20-page digital comic, he said, "I don't mind it too much. I can start a collection in one place." So there we are--in a totally unscientific sample size of one--a few words with that mythical "new reader" that DC is hoping to get on the line with this undertaking. And what got him in? Mainstream media coverage of a non-superhero book available digitally for an 8a.m. purchase. Sounds to me like The New 52's marketing strategy worked exactly the way it was supposed to. With a little luck, Nielsen will help them see that guys like this exist and that titles like Blackhawks serve a real purpose to their bottom line.

A Few Words With An Outsider: What's DC Likely to Learn From Nielsen?