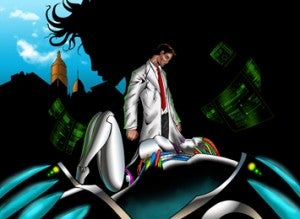 The blending of comic books with other aspects of culture such as television, film and clothing is nothing new, nor is its influence on music; however, indie band A Life of Science has created a project that takes their latest album, The Apneist, into the realm of a multi-issue, comic book narrative. The project is written by James Keenan, a man who wears several hats in the band, namely vocals, bass and synth duties. The comic book adaptation of their concept album, which deals with two miraculous births on the day of some of the worst destruction on earth, is illustrated by Will Torres, a recent collaborator on Seth Green's comic book project Freshman Summer Vacation Special #1 from Top Cow, and the project follows a sprawling narrative through tales of love and scientific intrigue. The project will not just stop at a comic book series on the album, but there is also a film project planned. Recently released at Baltimore Comic-Con, issue 0 of the comic book version of The Apneist takes the reader into the origin story of main character Jon Tate, one of those two miracle births mentioned earlier. The comic book series will expand on the story, focusing on robots, involvement with the government, and the over-arching story of Jon's journey and connection to the other birth on that day, a girl named Sandy. In listening to the album, there are lots of positives to be excited about. Many of the songs, including the title track and songs "Text Support" and "San-D4000, You are Immortal" fit wonderfully with the futuristic and sci-fi oriented storyline, as they have heavy and effective electronic elements that give the listener the feel of being enveloped in waves of synth, all of which work to the book's advantage. A Life of Science's most recent tour concludes on November 6th in Scottsdale, Arizona at the Martini Ranch. Those interested in a peek at The Apneist and the multimedia project surrounding it should check out the band and their own blend of storytelling through music either in person or by visiting their work on iTunes. If you prefer to see their work online, be sure to check out www.theapneist.com. You're certain to be in for a great experience!

A Life of Science Fuses Music, Comic Books and Narrative