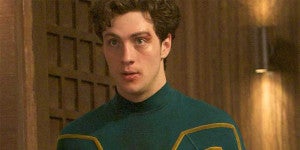 and Godzilla star Aaron Taylor Johnson isn't just being considered for the role of Quicksilver in Avengers: Age of Ultron. He's already met with Joss Whedon about the possibility of playing the super-fast mutant in the upcoming super-team-up.

"I'm excited when there are characters....The thing to think about is he's an abandoned child--him and his sister are abandoned and then they're in Eastern Europe. There's more character aspect that I'm interested in than the power aspect," Johnson told MTV in the interview embedded below. "And if that's something that you can make work, then there's always... you gotta have something that you can relate to."

He added, "Oh man, [Joss Whedon] is awesome. He's a real dude and I love what he did with the first Avengers. He had a real tough task to deal with and I think he pulled it off brilliantly"

He also jokingly criticized Hollywood for a lack of creativity, saying that he after Kick-Ass, he's been rumored for a number of superhero films.

Check out the conversation below.

Aaron Taylor-Johnson Has Met With Joss Whedon About Avengers: Age of Ultron