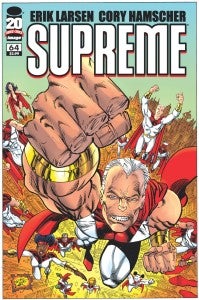 #64 hit the stands a couple of weeks ago, and it was the first new script featuring the character written in years. Granted, that's a bit like saying that the Soundgarden song from The Avengers soundtrack is their first new single since the breakup--it rings a little hollow, given the number of releases they've had that are new to the fans but recorded a decade ago. It's still factually accurate and Savage Dragon creator Erik Larsen was left holding not only the load of creating a new Supreme comic more or less from scratch but also with the unenviable task of following up an Alan Moore run that, having been canceled before it was concluded, had gained a kind of mythological air among fans. "The great, unfinished Alan Moore arc" finally wrapped up with last month's Supreme #63, and Larsen talked to us at the time not only about the issue itself but about the challenges that come from following in the footsteps of Alan Moore, especially at a time when Before Watchmen has his name on every fan's tongue. Larsen joined ComicBook.com to talk about Supreme #64, the action-packed, all-out war that followed on the heels of last week's very subdued, talky Moore issue. Remember that these commentaries are designed to be read as additional insight after you've read the comic. So spoilers on, and if you haven't read Supreme #64 yet...well, what's keeping you? The column is late this month and everything! There's really no room for introduction here, is there? The war--and it's as ambitious a war as we've seen in your work, arguably in comics, since the darkest days of Emperor Dragon--kicks off on page one and really doesn't let up this issue. After the relative calm of Moore's last issue, was it a priority for you to get the whiz-bang part of the story moving? Moore's whole last issue was building to a huge confrontation. There really wasn't any way to avoid that. That being the case--I thought it was important to pay that off in an exciting way. And it really was the perfect opportunity to set up the next chapter of the story. I don't think there's any advantage to putting off telling the stories I want to tell. That, and I'm not one to pad things out. I'd rather charge ahead and get things going. 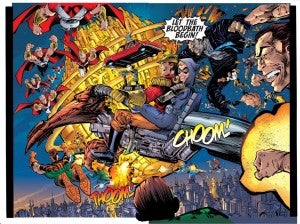 You know--the idea of Supreme as a Superman stand-in has been well-explored by Moore. You've said in interviews that you want to return the characters to his somewhat more cynical roots--but is that "look! Up in the sky!" a wink and a nod to what we're saying goodbye to?

It's always a part of the book. It's clearly riffing on the idea. Moore did a great run and saying it was just a Silver Age homage sells it short because it was so much more. At the same time--I didn't want to simply emulate what Alan had done. If that's what they were looking for--I would not be the ideal choice for the book. That was Ethan Crane's old boss, by the way, pointing to the sky. Is it fun to play with these kind of concepts? I mean, you've toyed with alternate realities in Dragon but never really had a chance to go hog-wild and Silver Age-silly with it like this. And I won't here either. I like the Silver Age Superman but that was before my time. I didn't grow up with that and I don't have to genuine affection for it that Alan has. I think what this book needs more than anything is to find its own voice. At the same time there's no denying its roots so it's something of a delicate balancing act to be everything to everybody. This issue is not really indicative of the shape of things to come but it is getting there. 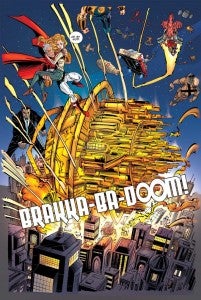 So the whole "dropping the fortress on the city" thing--that's gonna cost a lot of money to fix. Will Supreme be public enemy #1 here even AFTER he beats back the baddies? Darius Dax brought the place down. The mean Supreme was still in the Supremacy when it came tumbling down so he really can't be blamed for that. It's hard not to see a Frank Miller influence in the "brutal Supreme." Is it safe to assume that's intentional? I don't think I can ever shake off my influences completely but I wasn't thinking I was doing a full on Miller riff here. So given the comments I alluded to earlier about your take on Supreme being more of a dick--will we be reading the adventures of this Brutal Supreme from here on out? Or will "our" Supreme be working to restore his powers in the wake of what's happened here? The Mean Supreme isn't replacing the Moore Supreme. He is in addition to him. The idea here is that the surviving five will become something akin to the Hulkbusters in the old Hulk comics. Their goal is to take away Supreme's powers and restore themselves to their former glory. So they'll be dogging him like General Ross.