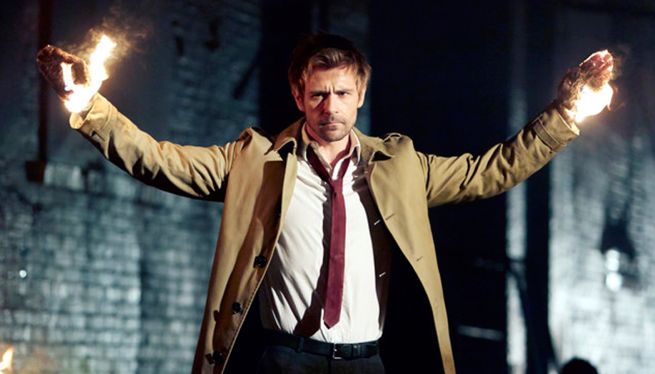 With yesterday's news that Constantine will not get a second season at NBC, showrunner Daniel Cerone also told fans that Warner Bros. Television was working to find a new home for the series.

But what are the odds it will actually happen?

Well, in all likelihood, it remains a "long shot," as Cerone described it to ComicBook.com shortly before his presentation to the network last month.

That said, there is a glimmer of hope for the series.

First of all, and most obviously, more and more series are being revived or kept alive by non-traditional broadcast venues like Hulu (who just rescued The Mindy Project), Netflix (Arrested Development, Full House) and Yahoo Screen (Community). That's the go-to for many fans, since Arrested Development was the biggest and most visible such resurrection ever attempted.

It's pretty standard practice in a case like this that the studio has a hold on the actors, writing staff and some of the other talent key to the success of the series until at least June, even if the network doesn't pick it up. That presumably gives them some time to make deals. Furthermore, the cast has expressed an enthusiasm for the series that suggests they'd re-sign even if their deal expired before moving to a new venue.

Meanwhile, the writers already have a few scripts in the bank, since NBC had ordered four additional scripts last season that never went into production. I'm not certain whether NBC or Warner Bros. would own those scripts, but I would assume it would be Warners. And if so? That means there's a month's worth of scripts before they'd even have to generate new content.

One thing that's worth mentioning -- and that got lost a little along the way when sources at Syfy were saying that the show could end up there -- is that while NBC may be in a very good position to move the series to one of the other NBC Universal-owned networks if they wanted to (which seems unlikely now), they would still have to negotiate a deal with Warner Bros., who own the show. They couldn't just unilaterally move the show like some had suggested when the Syfy rumors emerged.

For that reason, all the tweeting and streaming, and Constantine topping Twitter trends yesterday when it was cancelled are actually still very valuable to the show, even though NBC, at whom it was theoretically targeted, won't be the ones paying attention. It means Warner Bros., who are now preparing to see if the show still has life somewhere else, have seen that it can mobilize an audience (think Chuck and its famous "buy Subway, save the show" campaign) and that there are enough of them to make a dent in the often-impenetrable social media sphere.

Is it a long shot? Sure. But these are the things that the producers and studio will be banking on over the next few weeks while they try and figure out their next step.

After NBC's Cancellation, What Are Constantine's Chances Of Being Picked Up Somewhere Else?