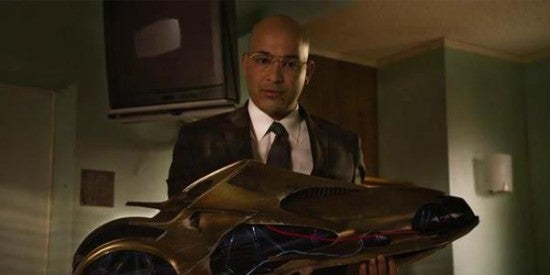 Agent Sitwell, the character portrayed by Maximiliano Hernandez in Thor and Captain America: The Winter Soldier, will make his television debut in an upcoming episode of Marvel's Agents of S.H.I.E.L.D. titled "The Hub," Marvel revealed today. The episode shoud air sometime between late November and January, depending on how ABC's scheduling shakes out through the holidays. The late episode currently cemented is "The Well," the season's eighth episode, scheduled for November 19. In the episode, dangerous secrets are being kept from Coulson's team, and he works the system to save Ward and Fitz when they are sent on a Level 8 classified mission that may end in tragedy. Sitwell, who was most recently seen in the "Item 47" Marvel One-Shot short film, was one of the characters who was rumored as a series regular early on. That "end in tragedy" thing is probably alright for him, though, since Captain America: The Winter Soldier features the character watching over Senator Stern. Hey, wait, didn't we just have a whole conversation about how the events of Agents of S.H.I.E.L.D. would have an impact on the world of Captain America: The Winter Soldier? Seems like this might have something to do with that...!