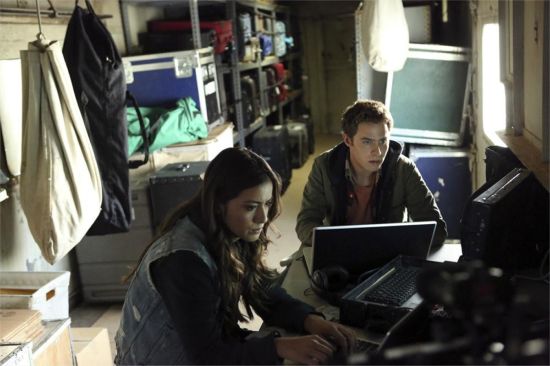 ABC has released three sneak previews of tonight's episode of Marvel's Agents of S.H.I.E.L.D., "T.R.A.C.K.S." The fist clip shows the team going under cover on a train, and a character played by none other than Stan Lee himself. The second clip shows a lady passenger asking Agent Ward to help her with a heavy bag. After some reluctance, Agent Ward agrees, only to find himself attached by both the lady and a man hiding in her cabin. The third clip is actually the first four minutes and thirty-five seconds of the episode. Coulson and his team board a train in their search for Ian Quinn. In "T.R.A.C.K.S." Coulson and his team are hot on the trail of the Clairvoyant and board a mystery train that seems to be headed for certain death. Marvel's Agents of S.H.I.E.L.D. stars Clark Gregg as Agent Phil Coulson, Ming-Na Wen as Agent Melinda May, Brett Dalton as Agent Grant Ward, Chloe Bennet as Skye, Iain De Caestecker as Agent Leo Fitz and Elizabeth Henstridge as Agent Jemma Simmons. Guest starring in "T.R.A.C.K.S." are David Conrad as Ian Quinn, Carlo Rota as Luca Russo, T.J. Ramini as Mancini, Ludwig Manukian as the Conductor, Emily Baldoni as Sofia, and a special cameo appearance by Stan Lee. "T.R.A.C.K.S." was written by Lauren LeFranc and Rafe Judkins and directed by Paul Edwards. "T.R.A.C.K.S." airs on Tuesday, February 4, 2014 at 8 PM ET on ABC.