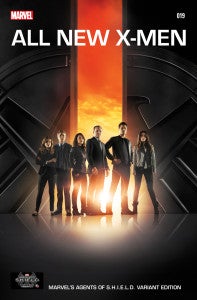 The X-Men might not be a part of the Marvel Cinematic Universe thanks to a rights deal with 20th Century Fox that prevents Disney using the characters, but that won't stop the latest bit of Marvel's TV and movie empire from appearing on the cover of a number of new X-Men books, among other Marvel titles.

Agents Coulson, May, Ward, Fitz, Simmons and S.H.I.E.L.D.'s morally gray consultant Skye will grace the covers of your favorite Marvel comics in the month of November. Each of these variant covers features a different character from the show, so don’t miss your chance to build up your variant collection with all 7, including a special cover featuring the entire cast!

You will find Marvel’s Agents of S.H.I.E.L.D. variant covers on the below comics, on-sale in November 2013

Unless there's something still to be revealed, the identities of the S.H.I.E.L.D. agents chosen to cover each individual issue has very little to do with the content of the title itself.

Check out the covers themselves above and below.

Detective Pikachu Resurfaces with Viral Look at Its Props

Space Force Is Now Available to Stream on Netflix