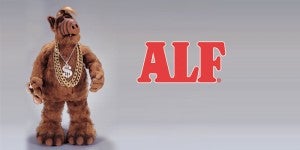 In a new interview with The Hollywood Reporter, former ALF showrunner Paul Fusco told the magazine that he's spent the last four years assembling a team for a feature-length adaptation of the series he created and plans to pitch it to studios. Fusco, who also voices ALF and does the puppetry work, has been working with the character on and off for decades now, and it seems he's got no motivation to stop. "I think the timing is right. That's a big important thing, timing," he says, quite confident in his prediction. "There have been movies out there of characters that I didn't think were on the same parallel as ALF that got movies made, so I think it's time. I think it could be a home run on a lot of levels." There's no more information than that, but hey! It can't be any more farfetched than a Battleship movie, can it?