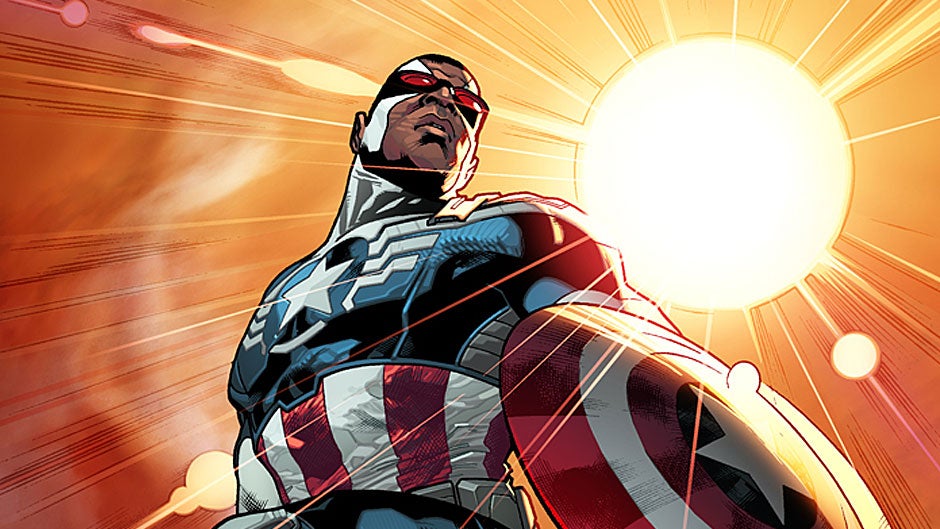 Sam Wilson (formerly The Falcon) picks up the mantle of Captain America this week in All-New Captain America #1 written by previous series scribe Rick Remender and drawn by Stuart Immonen. A lot of events led to this moment including twisty interdimensional time travel, a war with Arnim Zola, and Steve Rogers' aging in fast forward. The conclusion of Captain America #25 sewed up the dangling plot threads of the series and presented Sam with the shield allowing this issue to begin with minimal concern for what came before.

Remender and Immonen take full advantage of that set up and start the new series in a big fashion. The story begins with Sam already on a mission as he prepares to dive into a subterranean Hydra lair in search of a missing informant. From the moment he swoops down into the unknown until the very last page the action does not stop. There are short breaks for a humorous moment or bit of exposition, but the momentum is never lost. It's comparable to the opening of Raiders of the Lost Ark, a comparison that I've made with other first issues written by Remender. Rather than tell readers about Sam Wilson and how he is functioning as the new Captain America, the creative teams opts to show us what is happening in his life. Sam's learning curve, his new partnership with Steve Rogers, and nefarious Hydra machinations are all revealed through an extended action sequence that is considerably more enjoyable than panels filled with talking heads.

Remender places a lot of trust in the artists here. It appears that he may have scripted the issue Marvel style, allowing Immonen to determine the number of panels and focus for these pages. There is a noticeable lack of Remender's typical monologue that often runs throughout entire issues. Sam's inner thoughts disappear after the first third of the comic in order to allow the visuals to tell most of the story. Remender's trust is well placed. The artists working on All-New Captain America #1 are bona fide storytellers and their craft makes the first issue a very exciting read.

Immonen is the key to this issue effecting a propulsive style of storytelling. Ever since I first encountered his work in the pages of Nextwave, it has been exceedingly clear that Immonen is a master of kinetic action and quick pacing. He blends humor, character beats, and superheroic violence into every page. There's never too much or too little occurring in any given panel; he provides plenty of information, but never overwhelms the eye. This is all done through the use of clearly visualized panel compositions that build a story one piece at a time.

The excitement and flow of the story stems from Immonen's understanding of how reader's consume comics. Each panel serves a purpose, informing readers about the results of what came before and setting up what comes next. This may seem like an obvious way in which to construct a comic, but it's rare to see a storyteller build these connections so naturally or consistently.

Inker Wade Von Grawbadger and colorists Marte Gracia and Eduardo Navarro contribute to this flow as well. Von Grawbadger refines Immonen's figures and sharpens their forms. Captain America's aerial acrobatics are all the more impressive when his body makes a striking, recognizable silhouette. Furthermore, he helps to maintain a consistent look and appearance to the new costume, which is composed of a complicated combination of elements. Gracia and Navarro's colors help emphasize the significant forms within each panel. Monochromatic hues are used to blend some characters into the background while others are drawn forth with their complete color scheme. These cues provide additional information to guide the eye and make the extended action sequence flow without any unnecessary breaks.

This combination of skills is perfectly summarized in a fight between Captain America and a beloved C-list villain who many fans (myself included) will likely be delighted to see. The action does not consist solely of punches being thrown, but bodies being sent careening across rooms and through windows. It's a fast-paced brawl where nobody is ever left standing in the same place. Every pair of panels represents a shift in momentum. Immonen quickly connects a flying kick to a caught foot to a thrown body in three successive panels that create a pattern of reading where the eye is moved in the same tumbling motion as the villain's body. It is not just the clarity of this battle that makes it exciting, but the motion which is structured into the page.

All-New Captain America is not all action; there's a bright sense of humor that surfaces throughout the issue. It's impossible to not take some joy in seeing Captain America take down agents of Hydra and Immonen plays up the ease with which Sam can handle two-bit Nazis in green jumpsuits. The reveal of Steve Rogers location is hilarious, taking a jab at his now very apparent age. The joy of all these moments comes through in the faces of the characters. When Sam or Steve switch from being serious to skeptical or sarcastic, it comes across clearly in the minor changes of their faces. The humor here can often be obvious, but the manner in which it is told is surprisingly subtle.

Remender helps to establish the series by allowing it to evolve its own footing. Despite having written 25 issues of Captain America already, he allows this one to act as a true introduction. It is possible to pick it up and understand what is happening without an ounce of additional context. Instead, what little narration he does provide is to help define who Sam is.

The first third of the issue pairs Sam's flight and entry into the Hydra lair with an internal monologue mapping out his childhood and basic motivations. It provides an outline for who Sam is and distinguishes him as a character, despite not always gelling with the panels it is paired with. There's not an incredible amount of depth to this narration though. Sam's story is heroic and his desire to improve the world and do good are noble. He is clearly deserving of the mantle of Captain America. It's not entirely clear what is supposed to set Sam apart as a new Captain America though. His costume makes for a striking visual change of pace, but there's no clear thesis as to what differentiates him from those who have wielded the shield before him yet.

The final page of the issue summarizes the tone of this series. It's a classic out of the frying pan into the fire scenario and one that will put a big grin on the faces of Captain America fans. Remender has never given any of his characters any easy path to victory and he certainly isn't starting to make exceptions here. Yet there's nothing too grim or dark about this page. The characters on it pop with color and balance being both menacing and cartoonish. The journey ahead may be challenging, but there will always be a sense of fun and adventure to it.

All-New Captain America is a tremendous amount of fun. It blends classic pulp elements of the Captain America mythos with a new character who capably flies on his own two wings. With Immonen setting a thrilling pace, this series is off to an exciting start.

All-New Captain America is a Tremendous Amount of Fun (Review)