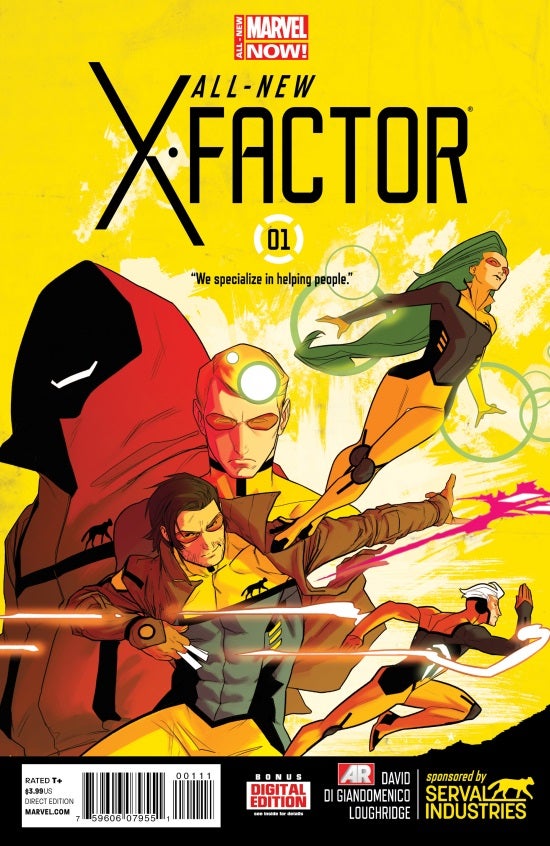 All-New X-Factor #1 represents the third new version of X-Factor to be introduced to the world by Peter David and it maintains the most vital aspects of David's best work with the team. The lineup is fresh, the chemistry between them is vibrant, and there are lots of questions that still need answering. The issue begins with Gambit up to his old thieving tricks, trying to steal a priceless artifact. He is unceremoniously interrupted by Wolverine, who's not buying Remy's weak justifications for stealing the object in question. Wolverine proceeds to scold Gambit for his illegitimate extracurricular activities involving the Thieves' Guild and how little time he spends at the school (which is kind of hilarious coming from Wolverine). This all drives Gambit to a bar, where he lets out some of his frustrations (violently) before being approached by Polaris. Polaris invites Gambit to Virginia to join the new version of X-Factor, which is fully owned and operated by Serval Industries. The premise of a corporately owned superhero team isn't an entirely new one, but it's a natural evolution for Peter David's X-Factor, following Havok's government-operated outfit and Jamie Madrox's independently owned and operated detective agency. The details are still a little fuzzy though. Polaris seems 100% on board with Serval, saying that her extensive research shows that they're primary concern is helping people, but we're only told this, never shown. David may be intentionally trying to instill in readers the same uncertainty about Serval Industries that Gambit feels, but not having a firm grasp of what Serval does makes it hard to understand why a veteran hero like Lorna Dane would sign on with the company. Then again, David is known for laying out long term mysteries to be revealed down the line, so maybe that's the whole point. It's fair to say that not a lot actually happens, plot-wise, in this issue, as the team doesn't actually embark on its first mission until nearly the end of the issue. But the issue is actually better for not rushing through the plot and instead allowing the characters a chance to speak to each other, get to know each other again, and really let Peter David's talent for witty dialog shine. Quicksilver, especially, is a welcome addition to the book as his arrogance and checkered past make him a favorite target for barbed comments and sly one-liners. At another point in time, Carmine Di Giandomenico's art would have seemed a bold and distinct choice for the series, but this kind of stylized artwork has become more and more common at Marvel since the Marvel NOW! relaunch. Even so, it is still attractive and energetic artwork, more fluid than Chris Samnee's, but still employing the same kind of simple character design and heavy shadow work. Lee Loughridge's colors work very well for the book as well. The Serval Industries yellow really pops and his use of a purplish hue for deep shadows keeps the pages bright, further distinguishing All-New X-Factor, tonally, from the dark, noirish feel of the previous iteration. The slightly grainy effect Loughridge employs for the backgrounds in the talking heads segments also keeps the pages from feeling empty during conversations. All-New X-Factor is off to a fine start. Peter David's dialog will make the book feel familiar to longtime X-Factor fans, while the setup, Di Giandomenico's art and Loughridge's colors give the book its own, distinct feel. Fans still mourning the end of Peter David's previous X-Factor series can lift their heads, a new day is here and it's looking like a good one.