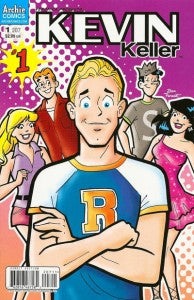 The Archie line of comic books is getting a little more diverse! In February of 2012, Riverdale's Kevin Keller will get his own solo series, according to Archie Comics co-chief executive Jon Goldwater. Based on Goldwater's comments, the character's series came about not because of stunts from the publisher, but the fans themselves. Goldwater said, "He's proven to be incredibly popular. We're just so proud of the success of Kevin and the fact that he adds a new dynamic to Riverdale." In fact, according to Goldwater, only seven total subscribers to the entire Archie line have cancelled their subscriptions due to Kevin's inclusion into the Riverdale universe, making a solo series all the more logical! According to The New York Times, "The series, titled Kevin Keller, will follow a four-issue mini-series starring Kevin that began in July and has started filling out his background, including his relationship with his father, who serves in the military and is supportive of his son's desire to follow in his footsteps." The writer and artist Dan Parent, who created the openly gay character, said that Kevin's life will still focus on life in high school, much like that of his peers. "Even the most popular kids are not popular with everybody. There's some adversity he'll have to deal with." Readers will also be treated to a glimpse into Kevin's adult life, via the married life storyline going on in Life With Archie. Goldwater explained Kevin's life in that book as well, saying, "It deals with the fact that he's a gay man and has gay relationships. We needed to figure out how to get Kevin into that book and, frankly, not sidestep the issue." Fans should look for more Kevin as he continues to appear and deal with life in Riverdale in current Archie books