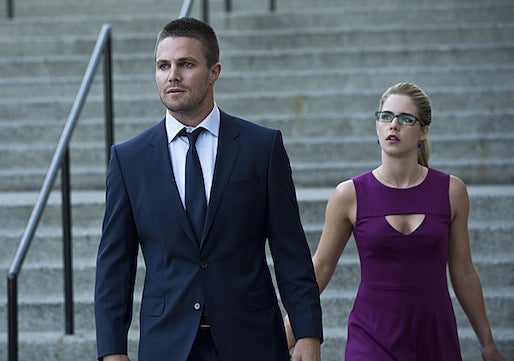 When the second season of Arrow started, Oliver Queen’s life was in shambles. His best friend was dead, his Mom was in prison, he hadn’t stopped the undertaking, and he had given up on his mission and abandoned Sterling City.

One year later and things could not be more different for Ollie. With Slade successfully captured, Laurel now in on the secret, and Roy an active part of the team, the mission is progressing smoothly. Criminals don’t stand a chance against the well-oiled machine that Ollie, Diggle, Felicity, and Roy have formed. Oliver is even trying to repair his personal, financial, and familial life. But this is Sterling City, and the calm can’t last forever. Oliver is going to have to face his greatest fear, and some very tough decisions about who he is and who he wants to be.

The cast comes back strong into their characters, with a few standout scenes between Emily Bett Rickards and Arrow newcomer Brandon Routh. A few characters remain unseen, but there is plenty of story to go around for the ones who are present. All in all, season three of Arrow is off to a strong start.