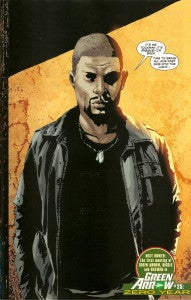 We already knew that this month's issue would see the introduction of Diggle, a character created for the TV series, but apparently that's not all we're in for.

"What we're going to see in issue #24, which is the same time season two of the show premieres, I'm kind of treating it as the start of season two on my arc," Lemire told Comic Book Resources in a video interview at San Diego Comic-Con International in July. "I'm going to start incorporating elements and characters from the show into the DCU. Obviously, it won't be the same story lines. It'll be the same versions of those characters, but people like Diggle will appear now in the New 52."

You can see that video embedded below (via CBR, obviously).

The other most obvious element to introduce from the TV series is arguably Felicity Smoak--a character originally introduced in Firestorm comics, but who has become a fixture on Arrow. With The Fury of Firestorm the Nuclear Men already cancelled without having reintroduced her for the New 52 and Green Arrow's tech-savvy sidekicks killed in the first issue of Lemire's arc, Smoak's introduction is almost a no-brainer, as she fills a hole without taking anything away from another DC character.

In the TV series, Diggle has backstory involving A.R.G.U.S., the Suicide Squad and the Blackhawks--all properties which are present in the New 52.

Arrow: Elements of the Show Will Creep Into Green Arrow Comics