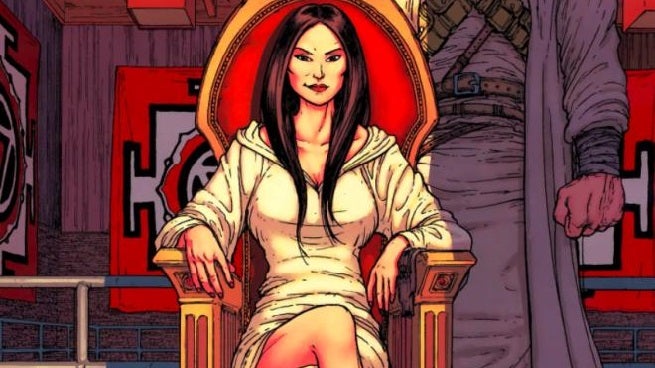 Since the first time Ra's al Ghul was mentioned on Arrow, one of the recurring questions of the series from fans has been whether his famous daughter, Talia Head, would ever appear onscreen.

In Season Two, before Ra's himself ever showed up, we got Nyssa Raatko, one of his other children, and she has continued to be a recurring guest for some time, appearing on tonight's episode as well as in December's midseason finale.

But...what of Talia, who has played a much larger role in the comics than Nyssa? During a conversation with reporters this week, executive producers Marc Guggenheim and Andrew Kreisberg answered -- and evaded -- a question about the character.

"Who's Talia?" Joked Kreisberg, sending a quiet ripple of laughter through the room.

"I ate her. She was my twin, I ate her in the womb," Law answered, to more laughter.

Finally, Kreisberg got serious. "We haven't made any firm decisions on whether Talia exists in our continuity," he said. "We are so, so, so happy with Katrina and Nyssa, and if we ever think of a reason to have a Talia or whatever incarnation we decide to do, it would be in service of furthering Katrina's story."

Guggenheim had a few words, as well, but the conversation, which took place following a screening of tonight's episode, often veered into the spoilery. Check back later today for the full interview.

Talia, who has long been a Catwoman-style "will-they-or-won't-they" pairing for Batman, was recently featured as the big bad behind Grant Morrison's final Batman Incorporated arc, and was responsible for the death of Damian Wayne, the genetically-engineered child she created by blending her DNA with Batman's. In live action, she most recently appeared in The Dark Knight Rises, played by Marion Cotillard.

Will Brock Lesnar vs. Daniel Cormier Happen in WWE?