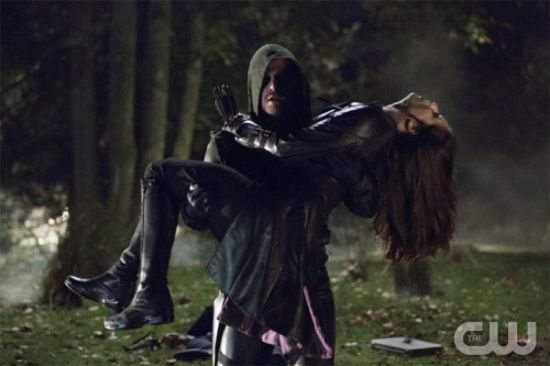 On the "Vendetta" episode of Arrow, Helena Bertinelli wakes up in bed with Oliver Queen. Later, when The Huntress is about to shoot the leader of the Triad, Arrow knocks her aim off target. The Huntress is angry that Arrow stopped her, and Arrow says he wants to show her what he does. At dinner, Oliver tells Helena that she's being reckless, and he wants to show her another way. Helena thanks Oliver for the sex, but she says she's not interested. Back at Arrow's hideaway, Diggle gives Oliver a lecture on hanging around with Helena. Oliver insists that he has to try saving Helena. Back at the Queen Mansion, Moria Queen and Walter Steel have a heart-to-heart about being honest with one another. At the Bertinelli Mansion, Oliver Queen drops by. Frank Bertinelli thinks Oliver's there to talk business, but Oliver is actually there to see Helena. Oliver takes Helena to Sara Lance's gravesite, and he tells her how he wasn't a good person before the island. Helena says she wants to open up, but she's afraid of getting hurt. Ollie promises to never hurt her. At Arrow's hideaway, Oliver tries to teach Helena how to use a bow and arrow. While Oliver is showing Helena his book of names, Diggle shows up, but he's not interested in getting to know Helena. After Helena leaves, Diggle tells Oliver that he shouldn't trust her. Queen's computer expert Felicity Smoak tells Walter Steele that someone else was watching his wife's transactions. She gives Walter a printout with a logo, and she asks if it means anything to him. Walter tells her no and reprimands her for spying on his wife, but it's obvious the logo does mean something to him. Anthony Venza is in his lab, bragging about his Oxycontin production. Arrow and The Huntress show up, and Anthony begs them not to hurt him. Afterwards, Arrow tells The Huntress that they struck a major blow to her father's criminal enterprise, and no one had to die. At Queen Mansion, Walter Steel is looking at a book that has the mysterious logo from earlier in it. After Victoria Queen leaves, he starts searching around, before he spies a small box that contains a small book with the same logo on it. The rest of the pages in the small book are blank. Tommy Merlyn is out on a date with Laurel Lance, when they run into Oliver Queen and Helena Bertinelli. Helena invites Tommy and Laurel to join them. Laurel brings up Tommy working for Oliver at his nightclub. Helena realizes that Laurel use to date Oliver, and now she's dating his best friend. Tommy gets upset that Laurel brought up the job to Oliver. Helena gets upset because she thinks Oliver still loves Laurel. Later, Tommy apologizes to Laurel, saying he was just scared. Laurel says she's sorry she brought up the job with Oliver, but it's ok to ask a friend for help. Tommy and Laurel share a kiss. Oliver is sulking, when Diggle comes up behind him. Oliver tells Diggle that he was right that he can't stop Helena from going over the edge. The Huntress bursts into a room, shooting several Triad members dead. She tells one of them to tell his mistress that Frank Bertinelli says hi. Arrow walks in the room and sees all the men dead. When Diggle calls to ask what the situation is, Arrow says "war." China White and the Triad show up at Frank Bertinelli's mansion. Right before China White is about kill Frank Bertinelli, Arrow stops her. As Frank is running away, The Huntress shoots him with a crossbow. Helena is about to kill her father when Arrow knock her crossbow away. Arrow and The Huntress fight, and Frank Bertinelli picks up the crossbow and shoots his daughter. Back at his hideaway, Oliver has saved Helena. He tells her that her father is going to jail for the rest of his life. Helena doesn't care and says that she's still looking to carry out her form of revenge. At a café, Diggle has a heart-to-heart with Oliver. Diggle says love isn't about changing a person but finding the right fit. At Queen Consolidated, Felicity Smoak gives Walter Steele a pair of glasses that allows him to read the blank pages of the book he found. The book contains a list of names. Tommy Merlyn tells Oliver that his father cut him off, and he asks for a job. Oliver tells Tommy that he has a general manager position that is probably available, and Tommy asks if he will be getting dental. The episode ends with The Huntress speeding away on a motorcycle.