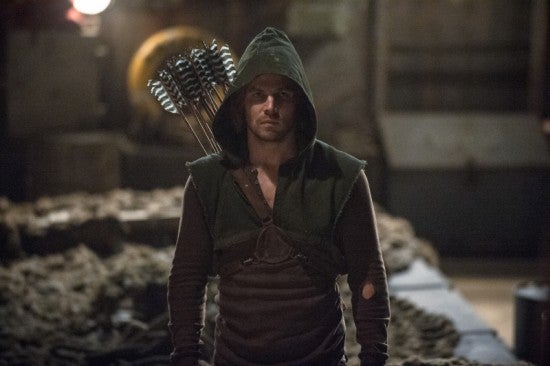 The episode picks up the second "Time of Death" left off, with Oliver and Slade still in mid-handshake, and Oliver asks him what he's doing in Moira's house. Moira interjects that he's just made a sizable contribution to her political campaign, which kicks off a volley of Slade and Moira bouncing back and forth with a conversation about politics in which Slade is implying things about his experience on the island for Oliver's benefit. "I know how difficult it is to pick yourself back up when people have written you off," he tells her, and she gives Oliver a meaningful look--not because she knows about the island (we assume), but because he's recently written her off, as well. Slade has brought a bottle of Australian rum, which the three of them drink, with Wilson toasting "to friendship." He picks out a model yacht on the shelf and asks Moira whether the family spends much time on the water. She says not since Robert's death, and he turns to Oliver to ask him about his time on the island. Oliver says he doesn't like to talk about it, and Slade says it must have been hell. Then we flash back to the island, with Oliver and Slade in the midst of serious combat training. This is where we see Oliver's real mastery of the bow and arrow, and Slade says Shado would be proud. Later, Slade is arranging the strategy for attacking the freighter while Sara is mixing something that she says will "work." The trio agree to destroy the Mirakuru to prevent Ivo ever getting it, in case the battle doesn't go their way. Sara and Oliver burn it out in the woods. She tells Oliver that they need to kill Ivo before he can try to talk Slade into thinking they're at fault for Shado's death. Wilson brings a bottle of Australian rum to the campsite and brings it to Ollie and Sara, telling them that he had been saving it for a special occasion and that their last night on the island is as good as it's going to get. 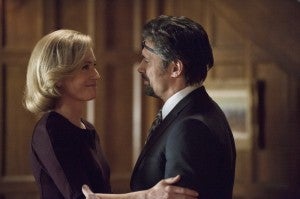 Oliver tells Sara that if he doesn't make it tomorrow, he wants her to tell Moira and Thea that he had grown up and wasn't the same, stupid kid who left. Sara tells Oliver that if she doesn't make it, she wants him to tell her family that she died on the Gambit, so they can remember her the way she was. That night, Shado appears in a dream to Oliver; she tells him that she's missed him and that she's dead because he chose Sara. She asks him why he didn't choose her, and then stabs him repeatedly, asking him the same question over and over and crying. Oliver bolts awake juast as Slade and Sara are readying to leave. Oliver puts on the hood for the first time and, while he's packing up his gear, Slade finds the Deathstroke mask and holds it up to the sun. The three of them make their way through the woods toward the freighter. On board The Amazo, Knyazev (I think?) wins a game of Craps against a man he calls "Hendrick," who gets angry. They're playing through bars between cells, and Henrik turns to the man in the cell on the other end--a bespectacled "preacher boy" with a pet mouse, and spits in the man's face. There's an agonized scream, then Ivo's #2 comes to get Knyazev. Ivo is on the satellite phone with someone who tells him that a woman's medical condition is deteriorating fast. Just as he hangs up, Knyazev is brought in; they strap him to a chair and prepare to take his eye for Ivo's research. On the island, Oliver is watching The Amazo, then fires an incendiary arrow into the sky, nearing a pile of kindling on the other side of the pond where the submarine was. Just before they can do anything to Knyazev, Oliver blows the pile and Ivo sees the explosion and sends me to retrieve them. 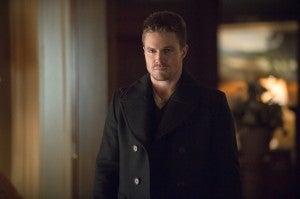 As a pair of his men head for the beach, Slade tells Oliver that they're no longer strangers, but brothers now. On the beach, Oliver allows himself to be caught by the men and thrown back into a cell. He tells Knyazev that he told him he would return, then passes out and wakes up with the mouse on him. The preacher introduces himself as Rev. Thomas Flynn, and introduces Oliver to Hendrick; the pair of them both remember Oliver and Sara ("That blonde whore") escaping together. Oliver tries to defend Sara to Hendrick but to no avail. He's doing very angry one-armed push-ups. His other arm stays completely still at his side. Thomas had been there for a year; he was working as a missionary in Moliku and was asked to come on board to read someone last rites. Ivo's #2 comes to get Oliver and walks him back to Ivo's torture chair. When he won't tell Ivo where Sara and Slade are, Ivo cuts open his shirt and decides to give him a truth serum. Back at the Queen Mansion in the present, Wilson and Moira are laughing together. She asks if he's married; he says that the only person he ever loved passed away a few years ago. Oliver tells him that eventually you have to move on, but Slade says he doesn't believe that. 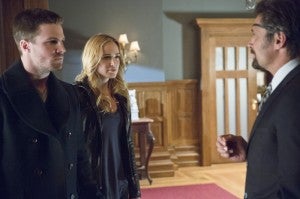 He asks to see Robert's art collection, and while Oliver objects, Moira agrees to show him around. She leaves to get the staff, and Oliver tries to stab Slade with an ice pick. Thea shouts for Moira and Oliver; Slade catches Oliver's hand and tells him that he has to meet the rest of the family. Back on the island, Ivo is compelling Oliver to tell him what is going on; he says that Slade and Sara are in the engine room on the freighter becuase they have a raft. Flash back (within the flashback) to the cave, where Sara is giving Oliver the concoction she was mixing; it's to offset the sodium pentathol. As the men are walking Oliver back to his cell, he jumps and incapacitates them. Slade and Sara float in on the parachutes, having jumped form the highest point they can reach on the island, where Ollie was when he shot the bonfire trap. Sara gives Ollie the hood, arrow and quiver while Slade takes his blades and the Deathstroke masks, and tells Oliver not to kill Ivo; that Ivo is his. He leaves, and Sara reminds him to kill Ivo. Back at the Mansion, Thea is giving Slade a tour of the family's art collection. There's a piece that they tell Slade people are always trying to buy, but they won't sell because of its sentimental value to Robert. Oliver continues to make small talk, but calls Felicity on his cell phone surreptitiously. In the cave, Sara is coaching Roy (shirtless, so apparently this is a key part of training at the Foundry) on shooting a bow; he's terrible at it. She remains upbeat. Felicity and Diggle come in, answer the phone and put it on speaker when Felicity thinks they've been butt-dialed. Sara, though, hears Slade talking and figures out what's going on. She gathers the troops, with Diggle's biggest gun and Roy's Mirakuru powers, and tells everyone that Slade was a trained killer even before the drug and that if they get a chance to kill him they have to take it. Felicity, worried for Oliver, stays behind. Aboard the Amazo, Sara is releasing all the prisoners. She lets Knyazev, Flynn and Hendrick out, but Hendrick attacks her for helping Ivo rather than running. Flynn clubs the man and saves her before he can strangle her to death. 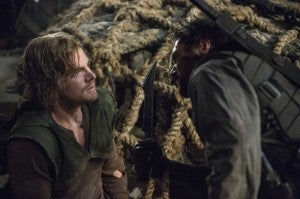 Ivo's men all have guns but Slade is taking them out by the handfuls and small explosions keep rocking the boat. Oliver takes out the man on the deck en route to taking over the control room. In the control room, Ivo calls his wife, who doesn't want to talk to him because he abandoned her. An explosion rocks the room he was in, and he falls. Oliver hesitates before killing him and he pontificates about how it's all Oliver's fault for choosing Sara. Oliver tells him he'll still kill him, but Ivo asks what Slade, who has heard the whole thing, will do. He pulls the mask off and confronts Oliver. Oliver tells Slade he can explain, and while Slade tries to kill him, Ivo makes his escape. Slade tells him that Ivo is as dead as he is either way , but in their scuffle, the controls were kicked and the Amazo ran aground so the jolt gives Oliver a chance to escape. On the deck, a battle breaks out between the crew and the freed prisoners while Ivo makes his escape through the chaos. Oliver heads out onto the deck, where Knyazev takes a dead man's gun and tries to provide cover fire or Sara and Flynn. Oliver saves the lot of them, and the four of them decide to abandon the ship, Slade and Ivo and make their way back to the island. Just before he can get off, though, Slade catches Oliver and begins beating on him, throwing him into a cell on the ship and then killing the captain and taking over the Amazo. Back in the present, Diggle is set up across from the Mansion to take a shot when Slade exits the house. Roy is meant to get Thea and Moira away from Slade while Sara makes her way inside. Roy comes to get Thea, and he and Slade have a little handshake competition. Sara calls to Oliver from the stairs, to Slade's surprise. Oliver asks Slade what he'd like to do now, and Slade tells them that he has to leave. He tells Moira he looks forward to seeing more of her, and kisses her good night. Oliver interrupts them to walk Slade to his car. Outside, Diggle is about to take the shot when he's attacked from behind and knocked unconscious. At Slade's car, Oliver asks him what he wanted. Slade tells him that five years ago, he made him a promise, and that he's here to fulfill it, then he drives away. Back on the island, Sara is joined by a handful of prisoners from the Amazo when she realizes Oliver is still gone. Slade wakes him up from his unconsciousness and tell him he needs him to see something, then has Ivo's men drag him into the center of the ship. He secretly kept the Mirakuru, and Oliver and Sara burned a box of dirt. 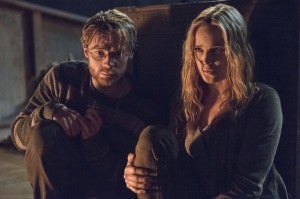 He gives Ivo a gun and tells him to show him how he killed Shado. He slices Ivo's hand off and then tells the men to take him away. Then he turns to Oliver and tells him that he won't kill him until Oliver has known complete despair--and that he promises he will. Back at the Mansion, Oliver goes in to check on Moira. She tells him that she knows she and Oliver have their differences, but that she can't excuse the way he treated Slade; that if he's going to act like that, he shouldn't come around the house anymore. Oliver leaves, and you cut to a series of video screens. Slade is watching the Mansion from a bunch of small cameras he planted while taking the tour.

Arrow Recap With Spoilers: The Promise