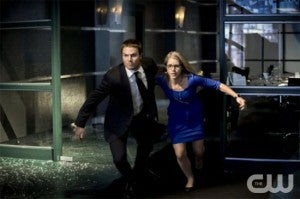 's season two premiere drew rave reviews but didn't blow anybody away in the ratings department last night, drawing the biggest numbers of the night on The CW but still only about 2/3 of the audience that last year's series premiere managed. A 2.7/0.9 rating was about on par with last year's average ratings for the show and virtually identical to the finale, which remained The CW's best-rated show for most of the season. The show is likely safe for at least another year regardless of ratings, since it was such a big success for The CW last year that they started building a schedule around it, with star Stephen Amell's  cousin Robbie starring on The Tomorrow People and a Flash spinoff slated to go into development for next year.