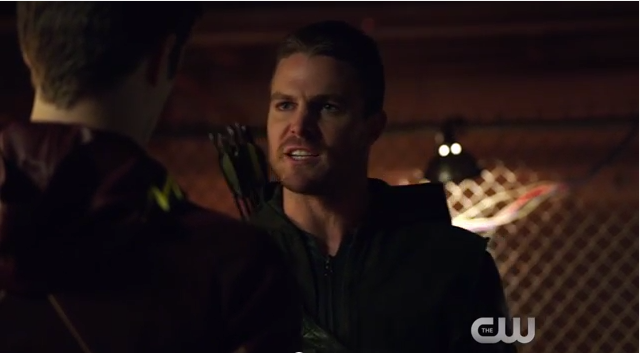 The CW has released a new clip of tonight's Arrow episode, "The Brave and the Bold," which continues the two-night crossover with The Flash.

In the clip, Barry Allen and Oliver Queen get a trace on Captain Boomerang, a.k.a. Digger Harkness. But before they set out to find the episode's antagonist, The Flash questions Arrow's slightly medieval interrogation tactics. Naturally, Arrow isn't one for lectures, especially when they come from a newbie like The Flash. As the not-so-dynamic duo's debate escalates into a heated argument, the future of their partnership looks grim.

The first half of the Arrow/The Flash crossover, which aired last night, performed favorably for The CW, netting a 1.5 rating amongst 18-49 year-olds. In that episode, the Flash and Arrow teamed up in Central City to stop Prism (or the Rainbow Raider, depending on your style). In tonight's episode, The Flash visits Arrow's home turf to stop Captain Boomerang, an iconic villain in the Flash's comics. Check out the video below for the full super hero squabble.

Arrow: The Brave And The Bold Clip Released