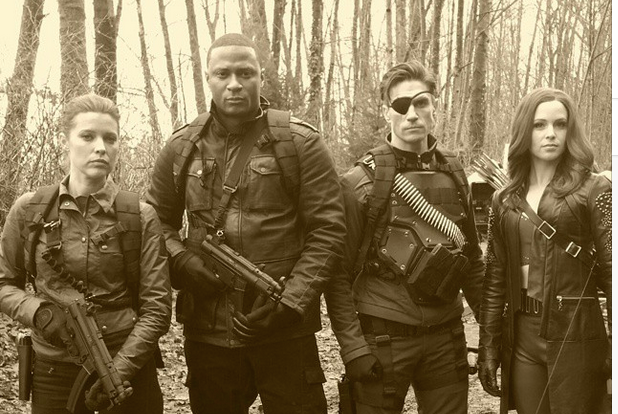 It looks like a new Suicide Squad in assembling for this season of Arrow.

Series star David Ramsey, who plays Diggle on the DC Comics television series, recently posted an Instagram photo of himself with series characters Lyla Michaels, Deadshot, and Cupid decked out in combat gear and all sorts of artillery. While Ramsey wouldn't confirm it in his post, the lineup almost certainly looks like Arrow's next official iteration of the Suicide Squad.

The Suicide Squad, for those not in the know, is DC Comics' team of imprisoned super criminals who embark on deadly government missions in return for a reduced sentence. In the Arrow universe, the Squad is lead by spy group ARGUS. Back during Arrow's second season, Diggle led a different version of the squad which included Deadshot, Bronze Tiger, Michaels, and Shrapnel.

After Arrow apprehended his new nemesis Cupid earlier this season, he turned her over to ARGUS, where it was suggested that she would eventually join the Squad. We do know that a new version of the Squad is coming during this season's 17th episode, as Deadshot actor told ComicBook.com last week. Whether this is the full lineup, or just a tease of what's to come, remains to be seen (by which we mean, we really want Harley Quinn to join).

Arrow returns to the CW on Wednesday, February 11th at 8:00 on the CW.