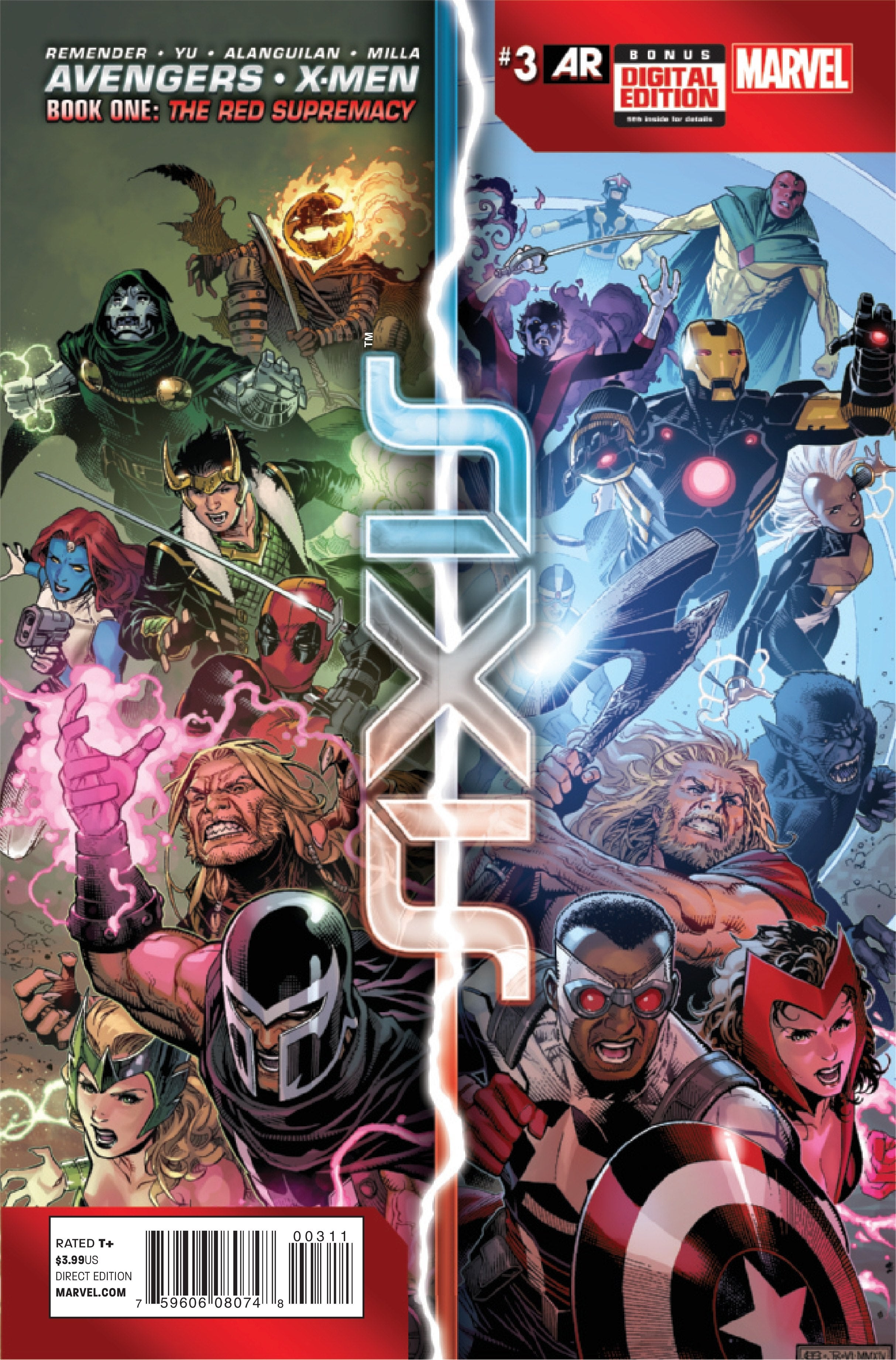 The first act of Avengers & X-Men: Axis, "The Red Supremacy" is complete. Although there's still a lot of story in this mini-series left to be told, it's a good point to stop and assess the event so far. In my reviews of Axis #1 and Axis #2 I addressed the series lack of focus and inability to craft conflict. The third issue continues to trend along the same lines as the previous ones. Although Leinil Francis Yu's artwork provides some exciting individual panels, the issue is a mess when read as a whole. The action sequences are often underwhelming and the inks appear rushed. The problems with the first act of Axis are not created by the art though, they come from a complete lack of direction in the story.

Axis is an event comic. It features over the top action, big consequences, and loads of characters. It's a fever dream of superheroes paced at the speed of insanity, and there is absolutely nothing wrong with that. Event comics are a very, very specific sub-genre. Although not everyone enjoys them, there's nothing inherently wrong with their scope or style. Whether a series is or is not considered an event, doesn't excuse a lack of quality though. Event comics are every bit as capable of telling compelling stories as anything else. To see that, you don't have to look any further than the master template for them all: Crisis On Infinite Earths (henceforth referred to as COIE).

COIE is an excellent comparison for understanding why Axis #3 doesn't read very well. They both feature an enormous antagonist being confronted by a vast number of heroes with the entire Earth at stake. The goals of the two series may vary, but the narrative vehicle is the same make and model. Axis #3 suffers from a lack of definition in its problem, solution, and why anyone should care about the consequences; those three components are never in doubt when reading COIE.

The central problem of "The Red Supremacy" seems obvious at first. The Red Skull has gained an inordinate sum of power and plans to use it. What he plans to use it for is less tangible. There is certainly a lot of bad stuff occurring in Axis #3. People around the world are attacking one another and the heroes are being handily beaten by a pair of Sentinels. There's no urgency to their fight though. The events leading to this battle have occurred over an indeterminate frame of time. Readers are unaware how long the Red Skull has been wreaking havoc or what the results of the havoc have been. What is the Red Skull's ultimate objective? How does he plan to achieve it? These are no satisfactory answers to these questions.

Compare this to the antagonist of COIE, the Anti-Monitor. Despite a goofy name and appearance, this character works as a great engine for conflict and narrative. He is driven by a singular goal: to eliminate all existence. His means for achieving this goal vary, but are always clearly explained. For example, he must construct an anti-matter cannon to overcome the defenses of the five remaining universes and destroy them. The threat of the Anti-Monitor is clear because his goals and plans to achieve these goals are clear. Story's require a conflict that can be understood. They must be able to answer the question: what happens if the heroes fail? In COIE the answer is plain: the multiverse is destroyed if the Anti-Monitor constructs and activates his cannon. In Axis #3, the only answer available is "bad stuff".

Without a clear objective, time table, or detailed plan, there's no way to craft an understandable solution. Readers want to root for heroes. They want to cheer on the defeat of the bad guys and cringe when a potential route to victory is blocked. For that to be possible, there has to be an understood path to that victory. Axis #3 presents a solution, but it happens so quickly that there is no space in which to build tension. Most of the issue is a throwdown between Red Skull and Magneto's villainous reinforcements. The closest semblance to a plan here is to hit the bad guys until they fall down. When a magical solution is discovered, readers are never actually shown why or how it will work. It's simply a matter of telling. Magic happens and then the Red Skull is defeated. Although it's possible to understand what happened, the experience of reading it is anything but exciting.

COIE again provides an excellent example of how to set up and implement a solution. The construction of the anti-matter cannon makes it clear that the device is absolutely necessary to complete the Anti-Monitor's plans. Therefore the heroes devise a plan to attack in the hopes of destroying the cannon. The problem and solution are rudimentary, but easily understood. That simple plot allows for exciting drama to unfold though. When the massive group of heroes are unable to reach the cannon, it feels as though everything is lost. Then The Flash manages to reach it and devise a new plan to destroy the weapon. The conceit is uncomplicated, yet it creates big shifts in momentum and drama.

That's the reason that an understanding of the problem and solution in Axis #3 is important. Conflict is the key to drama. Without being able to understand conflict, readers cannot invest in the drama of a story. The mayhem and pandemonium of an event comic should inspire excitement and reactions to rival their sweeping scope and impacts. Drama isn't born from scope and shocks though. In the world of superhero comics, it's impossible to find stakes bigger than what has come before or or even convince that anyone will stay dead. Drama in events comes from the same place it does in every story: characters.

The most dramatic moment in Axis #3 arrives after the Red Skull has been defeated when the X-Men and Avengers argue over what is to be done with him. The conflict seems to be grafted on to the characters, a necessary disagreement for the plot to move forward. It is over something so minor (where to take the Red Skull before he awakens) that it's hard to believe no one is willing to offer a compromise. Havok and Wasp's marriage breaks apart as part of the argument and it is treated like a significant and emotional moment, but it feels meaningless. Axis has lacked any legwork to invest the marriage with value (or to even clarify that the characters are married), so the lowest point of the issue falls flat. That marriage and a few smaller dramatic beats are based upon events from other series written by Rick Remender like Uncanny Avengers and Uncanny X-Force. Still, the motivations for the dramatic choices made here seem farcical even with that added context.

And once again COIE offers an example of simple, character-driven drama. In order to destroy the anti-matter cannon, Barry Allen has to sacrifice his own life. It's easy to view a superhero's death with skepticism, but the reaction of Wally West to discovering his mentor and best friend's costume is heart breaking. It's built on a connection that any reader can understand, one that is set up in the preceding pages, that Wally really cares for Barry. The connection between their costumes and names alone is enough to understand the significance. There's no nuance to the scene drawn by George Perez. Wally's cries accompanied by the disheartened faces of those around him are pure pathos, but it's very,very effective.

The problem with Axis #3 is not that it is an event comic. One of the most absurd and busiest event comics of all time has managed to remain a fan favorite after thirty years, one that still holds lessons in storytelling. The problem is that Axis is lacking a clearly defined story. There are emotional beats and action sequences, but they never combine to create a clear sense of momentum. Axis #3 doesn't give readers a good reason to care about what characters do or what happens to them. It never bothers to clearly define the problem, the solution, or why any of it should matter. It focuses on the scope of the comic while ignoring the narrative. Even in the most convoluted of events, it is possible to construct simple, effective stories.  Axis doesn't.

Despite all of the cynicism and skepticism from readers about events, "The Red Supremacy" was not destined to be a bad comic. The fault for that lies with the storytelling.