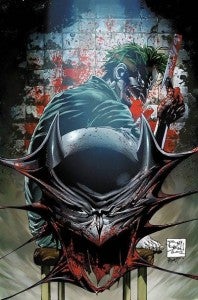 Two variant covers for Batman #17, the final part of The Death of the Family, due out tomorrow, are already starting to climb on eBay.

While there are still a number of newly-launched auctions starting out at low prices, the Buy it Now prices on the 1:25 variant cover and the 1:100 black-and-white variant are starting around $50 and $100, respectively.

Recently, a number of variants on high-profile comic book issues have been selling at high prices online; Superior Spider-Man #1 sold for more than $500 and Amazing Spider-Man #700's Steve Ditko variant sold for $1,200.

A number of previous Batman variants have sold for over $100, as well, although the rest of the Death of the Family issues have been largely selling at pretty standard rates for variants.

Batman #17 Variants Climbing on eBay Ahead of Tomorrow's Release