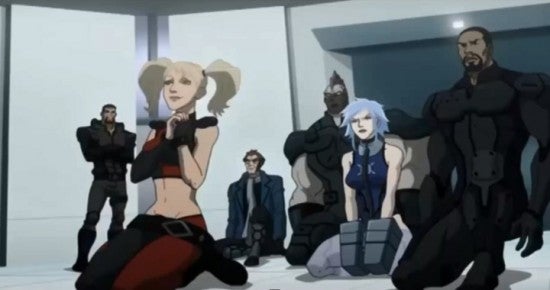 While Justice League: War and Son of Batman have both been set in an animated reinterpretation of DC's The New 52 publishing line, a new trailer has dropped for Batman: Assault on Arkham, suggesting that Warner Home Entertainment's next DC Universe animated film will instead be set in the world of the Batman: Arkham... franchise of video games.

The trailer, which sees The Joker acquire a dirty bomb and hide it in Gotham, and Amanda Waller release Task Force X -- the Suicide Squad -- to find it, sees them apparently racing against Batman while working the same case with very different means and motives.

It also feels enough like a Suicide Squad movie (especially with the tag line "Get ready to root for the bad guys") that it may in fact be one -- not unlike the Flashpoint movie and the upcoming Aquaman film, both of which were branded "Justice League" on the logic that franchise would sell better.

Since there has also been a Suicide Squad movie in the works on and off for years now, and the Squad was teased at the end of Arkham Origins, it's almost tempting to wonder whether the premise for this movie might mirror the planned concept behind the Suicide Squad game.

In the film, the Squad appears to be Harley Quinn, Deadshot, Killer Frost, Black Spider, King Shark and Captain Boomerang. Notably absent is Deathstroke, who was approached at the end of Arkham Origins about joining Task Force X.

You can see the trailer below; it's also attached to DVD and Blu-ray copies of Son of Batman, due out May 6.