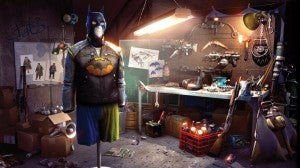 In case you haven't heard, there's a new game coming out called Batman Impostors. It doesn't star Batman. So far, he's not even confirmed to be in the game. Intrigued? Want to be a beta tester for the game? Then keep reading.

Gotham City Impostors is an upcoming first person shooter pitting a gang of Batman wannabes against a gang of Joker impersonators. It is being developed by Monolith Productions, the studio behind the excellent Condemned series, so the gameplay should be solid.

You can customize your Batman or Joker out the wazoo and level up along the way, earning rewards such as more customization items.

If the premise sounds familiar, it's because the "Impostors" arc from Detective Comics was given the go-ahead when Jim Lee heard about the game. The trade paperback for the story comes out tomorrow (8/10).

So would you like to be a tester for the game? Head over to The Gotham City Impostors Website to apply now!

The game is set as a downloadable release for the Xbox360, Playstation3, and PC. It will be available later this year.