Warning: Spoilers ahead for Batman Incorporated #8, on sale today.

In the pivotal page from today's Batman Incorporated #8, which was just leaked ahead of the official release of the issue, Batman is huddled over the body of his son Damian, while a girl with pigtails stands behind him.

Fans who haven't been watching the Grant Morrison run on Batman, and particularly this volume of Batman Incorporated, will likely think it's a bit random to have her just standing there, but Ellie has in fact been a character on the periphery of much of the title's action, and it's entirely likely that when the comic finally comes out for sale soon, we'll find that she played a role in it. 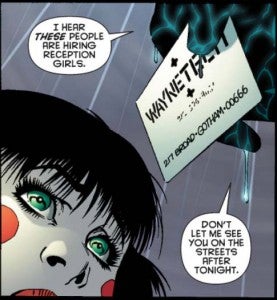 Well, she first appeared way back in Morrison's Batman #646, which if you can't tell happened before the New 52 relaunch.

You might not have recognized her last issue (she did appear in it, as you can see above), but that's because she wasn't painted up like a porcelain doll. When audiences first encountered Ellie, she was a prostitute, to whom Batman gave a Waynetech recruitment business card and basically told her, "These people will help."

It was a while before we saw her again, and when we did she still looked pretty much the same--back in Batman Inc. #6, published pre-New 52 and here abbreviated to differentiate the volumes of Batman Incorporated, she recurred in her clownish makeup, approaching Batman and seeming generally less traumatized even though her life wasn't too visibly different.

Cut to last month, when she appeared in that same red suit that we see in Batman & Robin #8. She's now a receptionist at Bruce Wayne's company, and got a background shot or two when Leviathan set upon the place.

What could her presence on that final page mean?

It's difficult to say, but Morrison has seeded this kind of thing before. In the background of the very first issue of his Vertigo series The Invisibles, two of the lead characters walked past some men in a park who (through the wonders of time travel) turned out to be a key part of the series' over-arching mega-plot something like four years later. 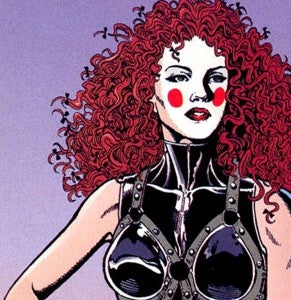 The Invisibles also featured a character named Ragged Robin, shown at right, who wore a similar facial makeup to what we saw in Ellie's early appearances. Ragged Robin is widely believed to also be Crazy Jane, who appeared in Morrison's Doom Patrol series in the '80s.

Asked about the similarities between the two characters, he wrote in an Invisibles letters page, "I'm not allowed to answer this one for copyright reasons (Crazy Jane belongs to DC, Ragged Robin belongs to me), but I'm sure you thought long and hard about what happened to Kay Challis after she left Danny the World."

Ragged Robin, whose given name was Kay, was born in 1988, the same year that Crazy Jane was created. This would make her 25 now, which is too old to be our Ellie, but given the similar makeup, it's difficult to ignore the possibility that Morrison is giving Ellie a "Robin" look...in the same book that Damian Wayne dies.

Thanks to Rusted Mecha for doing all the heavy lifting on the Ellie research.