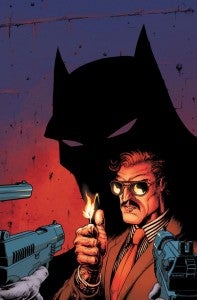 On Twitter, Batman Incorporated artist Chris Burnham has just announced that Batman Incorporated #3, which was due in stores on Wednesday, will be delayed until August 22, as it features "some grim imagery that would seem wholly inappropriate given the Aurora killings." No information is yet available on the DC Comics blog, where they seem to be foregoing posting promotional material for the time being in favor of making the site a clearinghouse for Warner Brothers' official statements on Friday's tragic shooting at a Colorado screening of The Dark Knight Rises. It's not yet clear whether the title will double-ship in August, or simply run an issue behind the rest of the "Second Wave" titles. Bleeding Cool, though, is reporting that DC implies some of the books may already have shipped to retailers. The site reports that those retailers are being asked to hold the books until their new street date, rather than putting them out for sale. Since the site is routinely fed information by retailers, it stands to reason that information is bona fide.