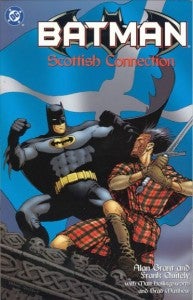 In a recent interview, Batman Incorporated writer Grant Morrison revealed that the blade that killed Damian Wayne was, in fact, a family heirloom passed down from Bruce Wayne's oldest ancestors. "Even when Damian dies, and I don't know if people have noticed, but the sword that kills him belongs to the very first known ancestor of the Waynes, it was used in Batman: Shadow of the Bat, in the 90s, so what we went back to," Morrison told The Huffington Post. "There's a suit of armor in the case, and it's Bruce Wayne's earliest ancestor's. That's who kills the boy, and so there's a lot of you know, you see him smashed against the Wayne 'W' and the foyer of the Wayne tower and so it's kind of very much about how these things play out over generations and how repetitive patterns play out of destructive patterns and it really never ends." Of course, in the last few days since that interview was released, fans have been scouring their back-issues to see whether they could spot the sword in question, and it's been challenging. Personally, I made it through the first 65 issues of the Batman: Shadow of the Bat series (plus the annuals), out of a total of 96 issues that were published (plus the annuals), before getting frustrated and trying to change tactics. Why? Because I was getting nowhere. Here's my notes, for your reference. I was skimming the issues, not reading every line, so it's possible that I missed a piece of expository dialogue...but if I did, it wasn't accompanied with any art. Here are the two swords I noticed in the 70 comics I read:

Shadow of the Bat #29 - St. Dumas's sword. Not the one, but looks similar. [Note: The reason I said St. Dumas's sword is out of the running is threefold: One, DC doesn't want to acknowledge that Azrael exists. I would argue that their vision of how Knightfall happened in the New 52 is probably closer to Christopher Nolan's version than the one published in the comics. Two, that sword appears on the cover of an issue but I do not believe ever actually appears on panel, since by the time Azrael first appeared in the series he was wearing the Batman costume. Three, the Order of St. Dumas has a long and involved history, none of which has been established to have anything to do with the Wayne family that I'm aware of. That said, Ra's did at one point take the Suit of Sorrows to pass down to his heirs--but that wasn't in Shadow of the Bat, and it would be a stretch to argue that the Order had these artifacts precious to Bruce's family and that at no point did that connection come up while they were being discussed.] 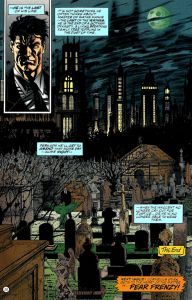 Shadow of the Bat #45 - Sword doesn't look the same, but it plays a key role, is owned by the oldest documented ancestor of Bruce Wayne's in the series, and then we get this ominous graveyard sequence with Bruce... [Shown at right, and we'll discuss that a bit later.] A suit of armor also appears briefly in that issue, though it is not commented upon. The sword is not seen in our time, only in flashback, which might explain how it fell into evil hands.

Not promising, right? What about this, though? Looking around on the Internet for a Wayne Family Tree, I found a reference to Sir Gaweyne de Weyne, a Scottish knight, ancestor of Bruce Wayne, and even older than Joshua T. Wayne, the murder victim whose life I'd been examining so closely in Shadow of the Bat #45. Plus, let's be honest, "Scottish Knight" makes more sense with a suit of armor than "Radical Abolitionist in 19th Century America." Sir Gaweyne de Weyne didn't appear in Alan Grant's legendary run on Batman: Shadow of the Bat, though, which seemed for a moment to be a strike against him as a candidate. Clicking through, though, I discovered that he had actually appeared in a Grant-penned one-shot titled Batman: The Scottish Connection. That book, in addition to being written by Alan Grant during the '90s, and a one-shot, and so easily confused with Grant's often one-and-done stories in Shadow of the Bat, featured two other things that Morrison has made great use of in the last eight years or so as he's written Batman: an international flavor to the Dark Knight and...well, Frank Quitely. Quitely, who drew Batman & Robin for Morrison (as well as All-Star Superman, Flex Mentallo and some Invisibles stuff), designed the sword in the story, which looks...familiar...

Not a perfect match, certainly, but it's  much closer than any other sword we've seen, its history matches Morrison's description (it may not be explicitly cited as belonging to the knight, but there's certainly a close connection), and the decorative bit at the end of the handle certainly looks right. 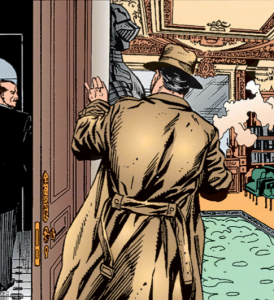 And a return to the series, just to err on the side of caution, showed that there were no better candidates--in fact, no swords that I saw, besides a handful in the hands of generic villains during the No Man's Land event when ammunition was scarce--in the rest of Shadow of the Bat. The only suit of armor I remember seeing in the entire series is shown at left, in an image taken from the aforementioned #45.

UPDATE: Below, you can see a better shot of what looks like the same armor, provided by reader Topher Seal (@larfleeze on Twitter), who noticed it buried in the background of the Zero Hour issue, #31. The armor is in the top left corner behind the sarcophagus.

Of course, DC has said that Zero Hour (like all Crisis events) didn't happen in the New 52, and Tim Drake was never Robin--so we can probably assume for the sake of argument that this scene did not occur as pictured. On top of which, Zero Hour issues contained numerous temporal anomalies and abnormalities (this issue, for instance, revolved around Alfred being replaced by a pre-Crisis version of himself who was chubby, bumbling and had no mustache), so the events that took place in those issues are likely suspect even as pre-New 52 canon.

Still, seeing the bat-adorned armor is not only a better, clearer shot but reinforces what Morrison did with The Return of Bruce Wayne, establishing that throughout history there has always been a connection between the Waynes and the bat. One could probably speculate that somehow or another, Bruce Wayne himself was Sir Gaweyne de Weyne during one of his many reincarnations throughout time, in fact. 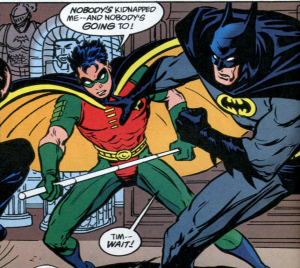 It's also not totally clear how Talia came to be in possession of a blade that belonged to a long-dead Wayne descendant, so it's possible there are two blades at play here. Maybe Morrison will explain it; his comment that he's "not sure how many people noticed" is an interesting one given that nobody at all seemed to notice until he called attention to it and then, days later, we're still scratching our heads as to whether we found the right one.

The only thing that keeps drawing me back to Shadow of the Bat #45 is that funeral scene, which resonates so well with what Morrison has been trying to do with this fathers-and-sons motif. Bruce Wayne ruminating on the idea that his life as Batman will almost certainly mean he'll die alone--likely prematurely--is something that he doesn't often say "out loud," even just to the readers. But Damian was probably his best bet at having an heir. With him gone, the next few issues of Morrison's run are certainly ripe for a reflection on Bruce Wayne's mortality.

Batman: The Secret History of the Sword that Killed Robin Damian Wayne