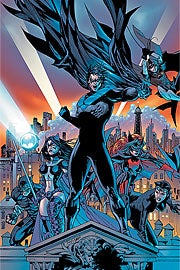 Now that Battle for the Cowl #1 has hit the comic book shops and the subsequent tie-ins are certainly on their way, let the speculation as to who will inherit said cowl commence. If the first issue of this intriguing storyline has told us anything, it's that the future of Gotham City is truly what's at stake here. With Arkham freshly emptied by an (alive?) Black Mask, a desperate Bat-Family and a pretender to Batman's name all working overtime, who, at the end, will be left standing to lead Gotham into, hopefully, a time of peace? Below, some odds on who it might be.

Catwoman: 250 to 1: Even though she has emerged as a champion, of sorts, for Gotham City in the recent past, and has become an intimate part of Bruce Wayne's life, the disconnect in different parts of their moral codes keeps the good Ms. Kyle from ever really being able to inherit the cape and symbol. Will she still be an effective part of the extended Bat-Family after BFTC ends? Probably, but Batman, she's not. Her interest in the East End mostly also may hinder this.

Jason Todd: 200 to 1: The off and on black sheep of Wayne Manor was let loose recently from his prison cell to receive a special last will and testament from Bruce. Could that last message have been a directive/invitation to take up his mantle? That doesn't seem likely, given the recent history between Bruce and Jason, and the fact that it would rankle Tim and Dick far too much. Is it possible that Jason is currently operating as this new "Batman"? They both do share a certain violent tendency towards criminals, but his taking on Bruce's role seems unlikely, even as a short-term substitute.

Batwoman: 150 to 1: The newest member of this costumed crimefighting enterprise, Kathy Kane may have skills, weapons and a costume to match the title she's chosen, but she doesn't have the recognition that will be needed for the next Batman. Ever since her debut in 52, she's been kept around the DC Universe just enough to make us remember she's there, but her stories haven't materialized that much. The recent announcement of her lead role in Detective Comics may raise her profile a bit more, but her newness to the overall scene will more than likely keep her from taking Batman's place fully, even if for a short time. Consider though that she did don this costume during 52 in his absence. Can she do the same again? Odds would say no, but stranger things have happened.

Robin: 50 to 1: Robin has had to do some serious growing up in the past few years. With his father murdered at the hands of the original Captain Boomerang in Identity Crisis, the return of his thought-dead girlfriend Spoiler and now the loss of Bruce Wayne, Tim Drake can no longer just be called the "boy" wonder. He more than proved his developing detective skills in the last issue of his self-named series, outwitting Lady Shiva and outsmarting Nightwing. Is he really ready though to step into the role of heir at this point in life? He seems to have the passion for it, but the confidence may not be there yet.

Bruce Wayne: 25 to 1: Never fully count this man out. Even though the last page of Final Crisis #7 left us with an interesting cave drawing, the greatest detective of them all always has an escape planned. It does seem unlikely that DC would go to all the trouble of killing him off just to put him back into the same role three months after, but again, the world of comics is a strange one. Bruce has so many backups, subconscious plans and tricks of the mind that his return in certainly a factor, but will he be the one wearing the pointy ears when the dust settles on this limited series?

Nightwing: 5 to 1: The most likely candidate to take over for his mentor and long-time leader. When Dick Grayson came under Bruce's wing as a recent orphan, Bruce took the sad young man and channeled the grief into a productive role as Robin, trusted sidekick. When Dick grew tired of Bruce's shadow and became Nightwing, he sent a message that he was now a man. He's always respected Bruce and his role as Batman, but he's made it very clear that no one else should wear that symbol except for Bruce. The odds say that he will likely get over this mental barrier and listen to what Alfred and others are telling him, but it will be interesting to see what he does. Can he truly be Nightwing forever?

Battle for the Cowl: Who Will Be The Next Batman?