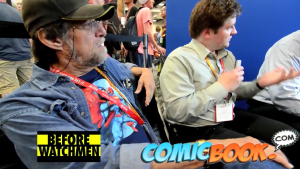 Len Wein, legendary comic book creator and the editor of the original Watchmen miniseries by Alan Moore and Dave Gibbons, was perhaps one of the most surprising additions to the Before Watchmen creative staff when the project was announced back in September. Writing not only the Before Watchmen: Ozymandias miniseries with artist Jae Lee at the drawing board, but also a Curse of the Crimson Corsair backup feature, drawn by Watchmen letterer John Higgins, he’s literally one of only two people (with Higgins) whose name will appear in the masthead of every Watchmen and Before Watchmen issue ever printed.

He’s also a guy who’s almost as iconic as Moore, and who has had well-documented disagreements with Moore dating back to when the pair were working on Watchmen together (he didn’t like Moore’s ending). Bringing Wein on board to tell his story almost seemed like they were taking the Moore controversy by the horns—and while it’s likely no other creator will be as vocal and controversial as J. Michael Straczynski, Wein doesn’t mince words when it comes to the writer of the classic maxi-series.

When DC approached Wein about working on Before Watchmen, the veteran writer and editor told ComicBook.com that “I said, ‘It’s about time.’ Alan had the opportunity for a quarter of a century to do some of these stories and he decided not to.”

Wein, of course, is arguably best known for two original creations of his that have forever altered the landscape of superhero comics, both of which have had successful screen adaptations. One is Wolverine, the X-Men member whose second solo film is currently in production in Australia following three X-Men films where he was the de facto main character. The other is Swamp Thing, originally created for DC’s anthology title House of Secrets; Swamp Thing was a key property in the evolution and exposure of Watchmen co-creator Alan Moore as a mainstream, American superhero writer.

And so, while Straczynski takes the somewhat more intellectually dubious route of casting aspersions on Moore's use of public domain characters when discussing Before Watchmen, Wein raises a more personal issue.

"I find it extraordinarily selfish of Alan to take the position he's taken," said Wein. "Had I taken that position with Swamp Thing, he might not have the career in the States that he has now."

He added, "It's an industry of characters, and everybody gets to play in everyone else's sandbox." He noted that the Watchmen sandbox itself was something of an honor to be invited to play in. "People ask me how I feel about the way other writers have treated my characters over the years, and my response is, 'Gee, I wonder how [Jerry] Siegel and [Joe] Shuster and Bob Kane, and Stan and Ditko and all those guys felt about how I treated their characters."

On the work itself, Wein said that he was surprised to discover what a great artist John Higgins was, and that Jae Lee's work on Ozymandias is some of the best he's ever seen. 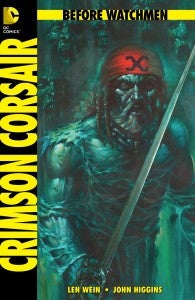 "I think the audience will be astounded at the quality of John's work," Wein said. "I was." He lamented not being aware of what Higgins was capable of back when he was an editor at DC, saying, "My God! If I had known!"

"I will probably be white-haired by the end of this project because of Jae and his deadlines. He makes them—he makes them squeak, but he makes them," Wein said of Lee. "The work itself is breathtaking. I have never seen anybody put more effort into what he’s doing. I dialogue from pencils. It got to the point where I was dialoging from layouts. He would do finished pencils that were extraordinary—then the inks would come in and I would realize that he’d redrawn half of what he’d drawn from the pencils."

Straczynski, who was present at the time of the interview, agreed that Lee's was the best art of all of the miniseries.

The writer says that in the first issue of Before Watchmen: Ozymandias, Lee sent him layouts that Wein thought were “perfect. Then the pencils came in and they were 180 degrees different from what the layouts were. I got furious!” He said that he wrote Lee a feverish e-mail demanding the pages be returned to their original layout. Lee, he said, wrote him an e-mail back detailing why he had done what he did, “And in every damn case, he was right!...and it looked spectacular.”

Check out the full interview below on video, from San Diego Comic-Con International earlier this month. The first half of our interview, which was conducted at the same time with Before Watchmen: Nite-Owl and Before Watchmen: Dr. Manhattan writer J. Michael Straczynski, can be found here. An interview with John Higgins, the artist on Curse of the Crimson Corsair, is available here.

Before Watchmen's Len Wein: "It's About Time."