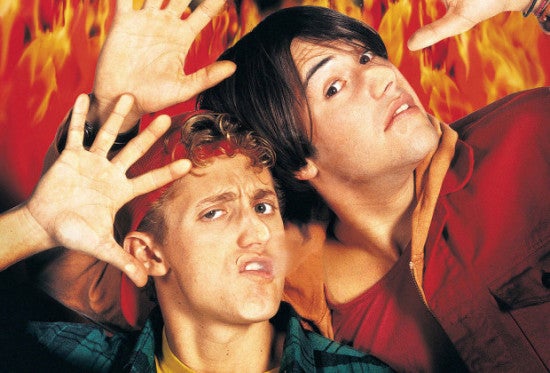 In a new interview promoting his upcoming documentary about Bitcoin and Silk Road, actor and filmmaker Alex Winter revealed that, in spite of what sounded like pretty dire tidings the last time he and Keanu Reeves talked about Bill & Ted 3, he's optimistic, having had recent conversations with the producers.

Asked about the "rumors" of a third film in an interview with vocativ, Winter laughed, "They’re not rumors! We’re working on it. We have a script that we think is great and worth making. In the last few weeks we connected with one of the producers from the first two films, and we’re all putting money together to go and get it made. But it’s been a long haul to get it here and get the script right."

In a recent interview explaining why he feels the characters endure, Winter's co-star Keanu Reeves said, “They’re fools in a classic storytelling sense, and I think it goes back to that hopeful lifeforce that is contagious. You root for them. And I think that turns into affection.”

He added of the sequel they’re working on, “If we bring in the idea of mortality – the fools coming up to mortality I think that is relevant.”

Of course, they’ve faced mortality in a very literal way before; in Bill and Ted’s Bogus Journey, the pair had to outwit the Grim Reaper (played by Iron Man 3‘s William Sadler). But that’s probably not the way Reeves is talking about.