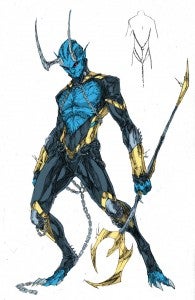 DC Comics has announced via its blog, The Source, that the next arc of DC Universe Presents (the publisher's character-hopping anthology title) will introduce a pair of fan-favorite superheroes who haven't appeared since the New 52 relaunch last September. Rolling out beginning in October, writer Marc Andreyko and artist Robson Rocha will write a five-issue arc based on Blue Devil and Black Lightning (or, as DC's blog says over and over again, "Lightening"), in which the publisher suggests that the pair will be a kind of odd couple of superheroes (in fact, they specifically invoke the Odd Couple TV series' famous opening teaser of "Can two divorced men share an apartment without driving each other crazy?".) struggling to work together as much as to overcome the bad guys. "When I first heard the high-concept, I was instantly writing scenes in my head," Andreyko told The Source. "I've always been a fan of the 'buddy concept,' especially when it's love/hate, and teaming these two seemingly disparate characters together makes for some great story dynamics. How did Blue Devil and Black Lightning meet? Why are they working together? Do they even like each other? All … well, ok,some … will be answered. Add in a bloodthirsty bad guy, a crazy drug, a guy in a demon suit and another who shoots electricity, mix well. Now enjoy!" 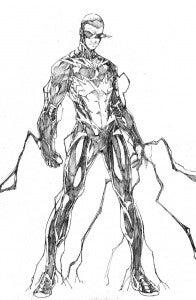 The story features versions of the characters redesigned for The New 52 by Teen Titans artist Brett Booth and features a version of Blue Devil who seems very slimmed down since the last time we saw him in a starring role, and who is physically more in line with Red Devil. The story begins with DC Universe Presents #13, in stores October 17.

Classic Game Acquire Will Be Re-Released by Renegade This Year