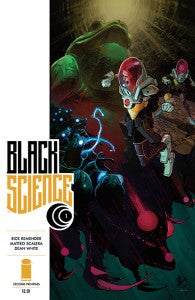 Rick Remender and Matteo Scalera's Black Science #1 has sold out at Diamond Comics Distributors and will go back to press for a second printing, Image Comics announced today.

Copies may still be available at individual retailers, or can be purchased digitally through ComiXology, Image's website or Google's Android Market.

A former member of The Anarchistic Order of Scientists, Grant McKay has deciphered Black Science and embarked on a journey through an alternate reality with his crew in tow. But he soon encounters none-too-friendly alien worlds and the exploratory mission they all first set out on suddenly a race for survival.

The publisher announced today that the first issue will be back in stores with a new cover on the second print, available on New Year's Day.

Black Science #1 Sells Out, Goes Back to Press