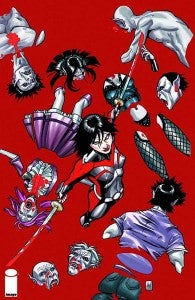 Writer Ron Marz is a busy guy. He's currently working on Shinku for Image as well as a number of projects for Top Cow (notably Artifacts and Witchblade). And he's the upcoming writer of Voodoo in the DC Comics relaunch in September, adding one more piece to the precarious pile that composes his substantial body of work on a monthly basis. The second issue of his creator-owned title, Shinku, was released the week before the San Diego Comic Con after a first issue that sold out and went back to press.

Shinku is the story of a Japanese woman who is the last samurai in her clan--a clan that has spent hundreds of years warring with a rival clan of samurai vampires. The vampires have risen to control an underworld empire, which Shinku is waging a one-woman war against. Marz (with artist Lee Moder) blends western comic sensibilities with the tropes of both vampire fiction and classic samurai film to craft a character and a world that's at once familiar and completely unique, with over-the-top action and violence, sexuality and a wry sense of humor familiar to anyone who's read Marz's work in the past.

In short, it's one of the most entertaining comics being published anywhere.

Marz joined ComicBook.com to talk about this month's issue.

Note: Because we are discussing the process and philosophy of writing an already-published issue, this conversation may contain spoilers for those who have not yet read Shinku #2.

ComicBook.com: So...we've got an implication here as to what Davis does in his "real" life and why he's important to the process. Will we see a payoff on that soon or is it part of the larger picture for his character?

Ron Marz: The importance of Davis to the storyline, and to Shinku herself, becomes pretty evident in issue #3. I wanted there to be some mystery as to why he’s even involved in the story, but I also realize you can’t leave those questions unanswered too long or the audience starts to feel like the plot’s not coming together.

ComicBook.com: Shinku certainly enters the story and immediately plays the Batman/Wolverine role of being the badass in the room. Is a concern making sure that her skill level is believable, or do you just think that since it's a central premise of the book, people have to use their suspension of disbelief?

Marz: No, I think you have to maintain some sort of plausibility, even if your main character is a badass. If your protagonist is just an unstoppable force, there’s really no reason for the audience to care about that character. There’s no element of danger anymore. Shinku is most definitely good at what she does, and she’s certainly confident about it, but she’s not going to go through this story unscathed.

ComicBook.com: Lee really got to shine in this issue--Shinku's action sequences were really great, the figurework both believable and sexy and the variety really great. After the relatively static nature of a lot of the last issue, did you want to make sure to give the artist, and the readers, a nice action sequence?

Marz: Sure, comics is a visual medium and there’s already way too many books on the stands that contain page after page of talking heads. To me, that’s not the best use of the page or of an artist’s skills. I always feel like if you as the writer aren’t giving your artist something exciting to draw on a consistent basis, you’re simply not doing your job. So while Lee is amazingly good at the subtle stuff, at the acting and body language and facial expressions, we definitely want to make sure there’s action and dynamic visuals in every issue. I think when comics are done right, there’s a balance to the action and the character work. I just happen to be blessed with an artist who does all of it incredibly well. Though I have to say, I think the sequence with Shinku descending to the elevator, and then the fight scene in the elevator, is one of the best action pieces I’ve ever been involved with, thanks to Lee.

ComicBook.com: You know--she's kind of right about Asano's guards. Even leaving aside their general nincompoopery, you have the fact that his "inner circle" of guards outside of the board room are feasting on schoolgirls DURING THE MEETING. How long before we see Shinku thinning the herd down to where the only ones remaining are actually kind of scary?

Marz: Well, part of what we’re trying to convey there is that the rank-and-file vampires are not only arrogant, they’ve gotten pretty complacent. They’re not the kind of warriors that the clan once produced, because they’re not really challenged by anyone except Shinku. But they’re certainly not all like that. The older vampires who have been around for a couple of centuries, and actually lived through the feudal era, are a lot less likely to be cannon fodder. Issue #3 introduces somebody who is definitely Shinku’s equal.

ComicBook.com: What's Shinku's relationship with the vampires' culture of secrecy? I mean, obviously she hasn't publicly exposed them or anything, but at the same time she's just kinda walking around the hotel looking all gory.

Marz: Shinku believes it’s her responsibility to destroy the vampires -- her responsibility, not anyone else’s. It’s a matter of her clan’s honor. So she really has no interest in exposing them to the public because that might actually interfere with her mission. But, if she has to walk through a hotel lobby splattered with blood, so be it.

ComicBook.com: I feel like, if this were a movie, the "...before she grows any more brazen" would be a great laugh line.

Marz: It’s all in the timing, isn’t it? That’s really an example of the words and the pictures working together to create a moment that neither could create separately. It seems like a little thing, but something like that is really the essence of comics, when the narrative is absolutely dependent upon the visuals to deliver the moment.

ComicBook.com: Is it telling in terms of Asano's character that neither he nor his lieutenants followed Shinku out of the board room after she humiliates them?

Marz: Not in terms of them being cowards or particularly afraid of Shinku. It was really meant to show them as being completely stunned that Shinku would dare to confront them in what they considered a completely safe location. Shinku is obviously escalating the confrontation here.

ComicBook.com: Will we get to see more from Oshima soon? So far, we've had (loosely speaking) a Davis-centric issue and a Shinku-centric one, in which Oshima just kinda stood around for both.

Marz: Yup, we’ll be fleshing out his character more fully as we go, no pun intended. Shinku is naturally taciturn, and not overly communicative, so Davis is going to end up having conversations with Oshima on a fairly regular basis. Shinku is not one to talk about herself, so if Davis is going to learn about her, that information is probably going to have to come from Oshima. I want all the characters, not just Shinku, to be revealed in layers, rather than just doing a big information download all at once. That feels much more natural to me.

ComicBook.com: There's probaly not a good way to talk about this, but we'll give it a try. In the hypothetical, is there a mission left for Shinku after she kills Asano? It seems that without him, his foot soldiers would fall apart pretty fast and obviously he's the one with whom she has a personal beef.

Marz: Shinku’s mission is to wipe out the entire vampire clan, not just its leader. But, Asano is the oldest and most powerful one in the bunch, so destroying him is a pretty tall order.

ComicBook.com: You got a fairly solid amount of backstory and information into what's essentially an extended action sequence this month. Whenever an issue moves so fast and includes so much action, it's hard to ask too many plot- and writing-centric questions but...how do you go about pacing out a story like this?

Marz: The process is just part of the craft of writing. Character is best revealed through actions and decisions the characters make, not sitting around and running their yaps. I wouldn’t be a very good craftsman if I didn’t understand how to reveal character and backstory through action. That’s actually something I put a great deal of effort into, the idea that if you know what you’re doing, and are clever about it, you can work all that information into the story pretty seamlessly. You see comic reviews going out of their way to mention when an issue is accessible or a good jumping-on point. To me, that’s celebrating something that should be a given in damn near every issue. If the comic you’re creating isn’t accessible to new readers, and only caters to the audience you already have, it’s a failure of craft and, frankly, competency.

ComicBook.com: For a book like this, where the violence and her skill level are both an important element of the story, is each action beat just as important as if it were a line of dialogue?

Marz: Sure, but that’s true of most any comic. Again, it’s a visual medium, so what you’re showing has to be at least as important as what you’re saying, and often more important. I know things are going well when I as the writer can get out of the way and let the pictures tell the story.