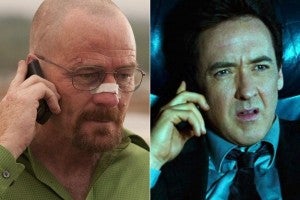 Over the summer, as the ramp-up to tonight's Breaking Bad finale began, producers and writers for the show started making the rounds on the interview circuit as early as June and July to talk about the waning days of one of TV's greatest cult-hit success stories.

The series, which has been a staple at San Diego Comic Con International for the past three years, wasn't always a multimedia empire poised to break ratings records. In its first few years, it was a modest success on a modestly successful network; it was really the cumulative effect of Breaking Bad, The Walking Dead and Mad Men that turned AMC into a juggernaut--and ratings-wise, the three have fed off of each other.

So it wasn't all that surprising back in July of 2012 when The Hollywood Reporter suggested that showrunner Vince Gilligan's first two choices for the role of Walter White--which ultimately went to Bryan Cranston, who has dominated the Emmy Awards over the last few years as Heisenberg--turned the series down.

AMC, according to this article, wanted John Cusack or Matthew Broderick in the role--both mostly known for their film work, although Broderick had done some episodic television (most recently a recurring role on NBC's 30 Rock). The article goes on to say that "Cusack and Broderick both passed. And after Gilligan showed execs Cranston's X-Files episode," AMC warmed to the idea of the dad from Malcolm in the Middle as a drug kingpin.

Gilligan, of course, had been responsible for that episode of The X-Files and wanted Cranston all along, so all was well that ended well--but the "what if...?" of Cusack and Broderick has become gospel among the show's fans, showing up in the trivia section of IMDb and the series's Wikipedia page. It's also shown up on a handful of online feature stories on things like "Roles that almost were...".

According to Cusack, though, it didn't play out that way.

Told by a fan that he had made a huge mistake in turning down the leading role in Breaking Bad, Cusack tweeted back, "Didn't turn it down. You crazy?"

He didn't elaborate further to say whether he would have taken it if offered, or whether it was ever on the table, although it's distinctly possible a misunderstanding as simple as somebody along the line saying, "Nah, Cusack wouldn't do TV" turned into "He turned it down" when the news got back to Gilligan.