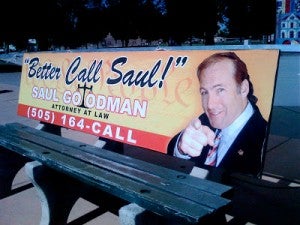 AMC and Sony Pictures Television confirmed today that they have reached a licensing agreement for a spinoff of Vince Gilligan's hit series Breaking Bad. As conceived, the new series is based on the show's popular Saul Goodman character with the working title Better Call Saul. Plans call for Saul to be a one-hour prequel that will focus on the evolution of the popular Saul Goodman character before he ever became Walter White's lawyer. Gilligan, who made a name for himself as a writer on The X-Files and The Lone Gunmen before moving to AMC, had joked about a Goodman-centric spinoff for more than a year, joked that he would love to see a law show in which the central character would fight to stay out of court. Bob Odenkirk, the actor who plays Goodman in Breaking Bad, is expected to return as Saul. Odenkirk, a former writer for Saturday Night Live and Tom Goes to the Mayor, is a Hollywood favorite, even if his face is more in the "Hey! That guy from...something..." territory for the average viewer. He's also directed a pair of Breaking Bad minisodes starring Saul himself in the past. He has appeared as a recurring or regular actor on The Larry Sanders Show, Tim & Eric and How I Met Your Mother. The spinoff will likely be more humorous in tone than Breaking Bad, especially given the fact that while Saul was sleazy when he first arrived on the scene, he never seemed to be a player on the level that he became once Walter and Jesse entered the picture.