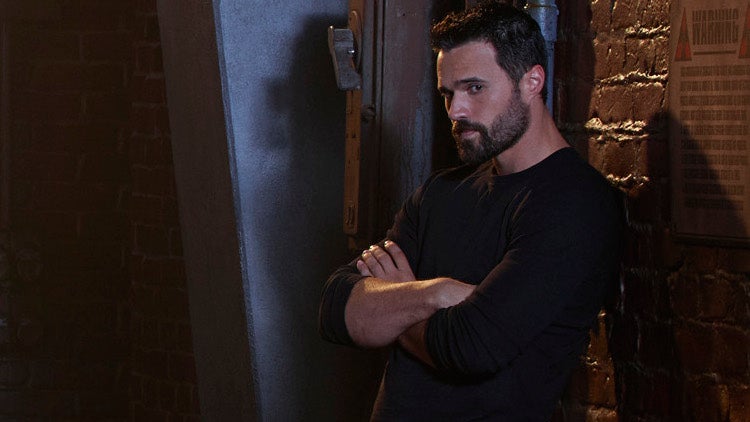 Former S.H.I.E.L.D. agent, Grant Ward (Brett Dalton), is a man on the run. In tonight's episode of Marvel's Agents of S.H.I.E.L.D. Grant must keep his head low if he wishes to stay off everyone's radar, including ones he cares about.

Brett Dalton was able to take time out of his busy schedule to chat with ComicBook.com on the phone about the fun he's having this season portraying Grant Ward, #Skyeward, who he'd like to share scenes with from the cast of Avengers: Age Of Ultron & so much more.

So I was doing a little bit of research on your fan base before we got started.

What's it like to enter a show, and have fan clubs like the Ward Warriors spin off based on you and your character?

HA! Oh man I love them. The Ward Warriors, the #StandWithWard crew, among others know how to make someone feel appreciated! The whole thing is really pretty crazy considering I tried to stay away from the whole "Twitter" thing for the longest time. I thought Twitter was just for photos of breakfast and over sharing. But since I've embraced it and found my little niche, a punny one, I really enjoy it. The fan response is just overwhelmingly positive and has kept me going.

It's a lot, to do a show as big in scope as this, with 22 episodes, and with my nose often to the grindstone. It's nice to have fans always rooting you along. Thankfully most if it is often positive!

East coast, 8 min till go-time. I know some of you are with me. Who else is going to #StandWithWard?

What about your your experience with the shipping community, and #Skyeward. Is that one a bit more unique, since you have to share the spotlight?

Chloe and I have known each other for the longest, out of all the cast members. I think I was actually cast just a week before she was for the show. Our relationship on the show is one that's CLEARLY there, but the writers haven't taken any easy paths and they didn't try to rush into anything.

As we get into this season, fans are going to love what's coming up. The tension is there, there is some water under the bridge, but some new road blocks pop up. That being said, do we lean into it at all outside of the show? We've posted videos online, fans have sent us captain hats that we've taken pictures of, and all kinds of things like that. It's what makes it a ton of fun.

This #TBT goes way back to last week. For all you #SkyeWard shippers, meet your new captains

I love our relationship. Chloe is very young, and she has that bright eyed outlook on everything. It's great to be around. I think she posted some video of me getting my makeup done and she's bouncing around while I sit there all stone faced. That to me is a beautiful look into our relationship. It's like those specials on the Discovery Channel where the big lion is just laying around, and the younger ones are tugging at it.

So lets talk about Ward and this season so far. You've been through it all with Ward going to all sorts of extremes. How has it been adapting to it, and are you enjoying your new role as "man on the run?"

I think ever since we found out Ward was a wolf in sheep's clothing, he's been very interesting to watch. He's a wild card, and in particular - this season we have no idea what to expect. He has gone rogue! He has all of these skills, knows how to use them and there's no stopping him. Before, there was someone always telling him what to do and now, he's his own boss.

Being on the run has its downsides too. I don't get to be around the team members as much as I'd like, but there is so much that the fans get for free. Put Ward in a room with Fitz, and you get that feeling of betrayal. Put Ward in a room with Skye, and you get the possible romance. Put Ward on screen with Coulson and there's the defiance. Those little undertones make it all worth it for me and make it a blast to be a part of.

Now, with his allegiances ambiguous, it's going to be very fun to see his relationships with everyone on the show evolve in this new landscape. Will he help? Will he fight? We'll just have to see.

I know when Captain America: The Winter Soldier came out, you were all surprised. Are you just waiting for the other shoe to drop when Avengers: Age Of Ultron hits? Is it on your radar yet?

Well you know- we didn't expect the title of our show to be called into question when Captain America happened. Here we were, Agents of S.H.I.E.L.D. and our organization is gone. Poof. We work for nobody now. Can you get bigger than that when it comes to affecting the show?

We're all on our toes this time around. Who knows, if Ultron decides to show up on the show, that could be fun. All I know is, seeing those two minutes have made me more excited for any movie ever. It's kind of crazy.

If ever given the shot, who do you think Ward would have the best on-screen chemistry with in the larger Marvel Cinematic Universe?

I could see also see Ward sharing some great scenes with Captain America too. They both have that relaxed sense of confidence. They both quietly like "Really guys? I get it, I'm here, I can take care of this with my eyes closed, lets move on."

With Iron Man, it'd be so fun. I know Robert Downey Jr. has expressed interest in being on the show, so anything that I need to do to move that along I will. I don't care if the scene is me sleeping in the background. That's how bad I want this to happen. To be honest, he might be the only person who could out-snark Ward.

Now that you're getting close to the midpoint of two, what are some things you hope fans really take away from Ward as a character before the season is up?

I hope fans start to understand a little bit of Ward's psychology. I want them to understand his journey and the events that led to who he is. There are a lot of things that happened in the very beginning that people just assumed was "Evil Ward" and I think that's unfair to Grant. It's too easy to go to.

There is a lot there that shows Ward as a real human being who has undergone some extra ordinary things over the course of his life. At the end of the day he's a broken kid who didn't have the family he wanted or that he needed. He was always picked on, until he was offered a way out.

But even after all that stuff that happened with Garrett last season, he was all alone AGAIN! So now Ward has to reconcile with what he's done, and what he wants to do next. It'll force some very tough decisions but hey, i'm sure people will continue to #StandWithWard

Brett Dalton on #Skyeward & Being On The Run in Marvel's Agents of S.H.I.E.L.D.

My Hero Academia Is Joining Fortnite and Fans Are Freaking Out