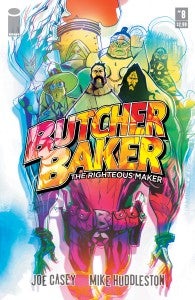 Following an interview in which writer Joe Casey addresses, at some length, his frustration with artist Mike Huddleston's slow speed in returning art pages on their fan-favorite Image Comics title Butcher Baker, the Righteous Maker, Huddleston took to the comic's Facebook page earlier today to  respond. " Not to take a personal conflict public (although Joe wasn't shy about giving his opinion via interview), but for the record: 'overcommitment' was not the issue with Butcher's schedule," said the artist. "As much as I love Butcher Baker it was a project that just didn't make enough money for me to live on. I had to take other work to keep the lights on and work on Butcher when I could. I've apologized to fans and to Joe for the delay." His comments were in response to an interview conducted on Comic Book Resources, where Casey (who, as part of Man of Action Studio, is involved with Marvel's Ultimate Spider-Man TV series on Disney XD) said, "My TV workload is bats--t crazy and I'll completely cop to that, but it actually has nothing to do with the interminable wait between Butcher Baker #7 and #8. The fact is, Huddleston found himself in a tough spot, having over-committed himself beyond the point of rational thought. He fell way behind and there was nothing I could do about it. It's frustrating as hell and, in my opinion, supremely embarrassing. It's not helping the cause of creator-owned comic books when creators can't keep their s--t together. Going into this, I thought it would be a fun, breezy ride that I could kick back and get my rocks off doing every month. Turns out, I've had to learn some harsh lessons from the experience." If that sounds like a pretty difficult gap to cross in terms of coming to a meeting of the minds, Bleeding Cool reports that Huddleston appears to agree.  While a cursory examination of the Facebook page doesn't turn up the following comments, they may have been removed after being reported by the news and gossip site earlier today. In any event, BC further quotes the artist as telling a fan who asks about the end of Butcher Baker, The Righteous Maker, "Yep, that's the end. We haven't been able to communicate on the trade either, so I think we are going to have the extra art, covers and pinups appear only in the European versions." This is the second popular Image Comics title to end this year due to apparent creator conflicts, the first being The Infinite, which ended abruptly following a dispute between Robert Kirkman and Rob Liefeld back in late January.