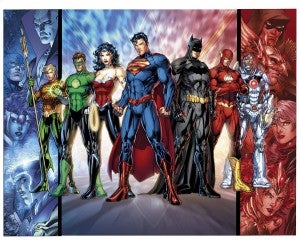 Updated: The original story identified the new character Lady Luck as an unidentified mystery character, but we were corrected by our friendly neighborhood bloggers at DC Women Kicking Ass.

Today at DC Comics' DC All Access panel at the Chicago Comics and Entertainment Expo (C2E2), Chief Creative Officer Geoff Johns--who also writes the company's bestselling Justice League series--told fans that when the current "Villain's Journey" storyline ends with August's Justice League #12, fans will see some roster changes to the team they've been reading since the New 52 relaunch last year. "By the end of Justice League #12, the team is radically different," Johns told the panel, but stopped short of describing how. The most likely scenario seems to be revealed in the image at right, one of Lee's first promotional images for Justice League, which shows a team centered around its current members but also inclusive of eight additional Leaguers, some of whom we haven't yet seen in the New 52 at all. Deadman, The Atom (Ryan Choi), Firestorm and Flashpoint's Element Woman can be seen on the left side of the image, while the right-hand side features Green Arrow, Hawkman, Mera and a new character identified by Johns as Lady Luck. While Choi, Element Woman and Lady Luck have yet to appear in the post-relaunch DC Universe, Deadman was already featured not only in the first arc of DC Universe Presents (as a solo story) but as a supporting player in the just-canceled Hawk & Dove. Mera appears semi-regularly in Aquaman and all three of the others have their own monthly books. The Savage Hawkman and The Fury of Firestorm have both been plagued by poor reviews and low sales, while Green Arrow has had more creative turnover than almost any New 52 book in spite of a TV pilot based on the character currently underway.