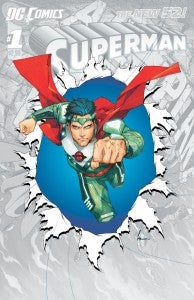 While Superman co-writer Keith Giffen didn't take over Legion of Super-Heroes, as was rumored, he did make his way to a new title, along with a number of other DC creators who did the same thing as today's solicitations revealed a DC Universe in flux. In addition to three new cancellations (Captain Atom, Resurrection Man and Voodoo, all reported earlier today), DC's New 52 superhero solicitations feature a number of creative team changes that presumably will go hand-in-hand with some new directions for the books that are sticking around. The Superman titles were probably the most affected, with Scott Lobdell and Kenneth Rocafort (of Red Hood & the Outlaws fame) taking over Superman itself from the departing Giffen and his writing partner Dan Jurgens, who also drew the book. Lobdell himself was announced only last month to be leaving Superboy, putting Tom DeFalco in the driver's seat just in time for the zero issue. Jesus Merino, who has been the inker on Superman since the relaunch, is off as well. Former Batwing artist Ben Oliver will cover at least this month's issue of Action Comics while Rags Morales is off. Lobdell's Teen Titans gets a fill-in art team as well, with Tyler Kirkham and Batt taking over from Brett Booth and Norm Rapmund for the month.  Keith Giffen, coming off Superman, takes over as co-writer with Tony Bedard on Blue Beetle, returning him to writing Jaime Reyes (a character he co-created) for the first time since he was writing it with Leverage creator John Rogers. Green Arrow gets another facelift, this time with Captain Atom artist Freddie Williams II taking over on art and Catwoman scribe Judd Winick moving to the title as writer. That makes the fourth writer and third art team for the title in the year since the relaunch. That opens up Catwoman (which is losing its artist to Talon) to take on Rafa Sandoval while Gregg Hurwitz writes both Batman: The Dark Knight, which was already his book, and also Detective Comics. Other art changes include Kano on Swamp Thing; Ardian Syaf on Red Lanterns; Tomas Giarello on Earth 2; Dwayne Turner on Red Hood and the Outlaws and Gary Frank doing an all-Shazam issue of Justice League.

Kofi Kingston Gives His Thoughts on the Mustafa Ali Situation

My Hero Academia: If You Think Something Is Wrong with the Manga, You're Not Alone

Diablo Immortal Should Satisfyingly Bridge the Gap to Diablo 4