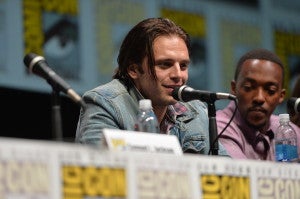 With no actual knowledge that Marvel was considering Captain America: The Winter Soldier as a potential follow-up, Bucky Barnes actor Sebastian Stan (man, this guy likes alliteration) told io9 today that he tried to infuse his performance in Captain America: The First Avenger with elements that would line up should he eventually be given the chance to play the older, more psychotic version of Bucky.

"In the first movie, without knowing they were going to shoot this movie ,honestly, I thought about this happening," the actor said. "I wanted to show different sides of him where you could potentially look back and see sides of him. 'I can see that person coming up this way, if he's being guided.' Yes, it was technically a different person, but it's still the same guy. There's got to be something about him you recognize."

Informing that, he said, you can't just drop some of the banter and the humor that helped define the character in the first film, and that will inform some of his performance even as the character is much darker and more brutal this time around.

Asked whether he thinks there's a possibility of taking over the role of Captain America from Chris Evans one of these days, as Bucky did briefly in the comics, Stan pleads ignorance.

"I don't know. It's another storyline that's great, but there are many story lines. I unfortunately have no clue," he said.

Of course, with Crossbones playing a key role in this film, it certainly sets him up as a potential threat for the future as long as he doesn't die. We'll see whether he's any good with a sniper's rifle...

Captain America: The Winter Soldier's Sebastian Stan Considered This Movie During the First