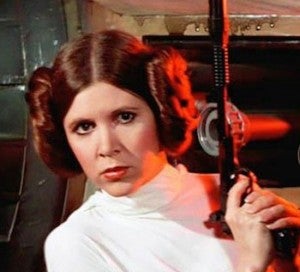 It looks like the old gang really wants to get back together. This should hardly come as any surprise, but TMZ.com caught Carrie Fisher on camera and was able to get confirmation of her interest in returning for Star Wars Episode 7.

Carrie Fisher was leaving LAX, when a TMZ camera man started peppering her with questions. First, Fisher was asked how it felt to be a Disney Princess, and she replied, “Fantastic, it made my day.”

Next, Carrie Fisher was asked if she would be in the new Star Wars movie if they asked her, and she replied, “Yes. Sure. Wouldn’t you?”

Finally, Fisher was asked if she thought George Lucas should have gotten more than $4 billion, and she said, “Four and a half.”

It was a rather short interview (of course it wasn't really an interview but more or a cameraman following her around as she went about her business), but at least it cleared up any lingering doubts to as if Carrie Fisher would be willing to return. According to recent reports, Harrison Ford and Mark Hamill are also interested in reprising their respective roles. And Comicbook.com recently interviewed Jeremy Bulloch, who would like to see Boba Fett return to sort out his differences with Han Solo.