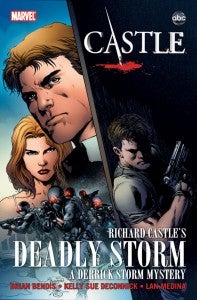 star Nathan Fillion is set to make an appearance at Comic-Con in support of...something, according to TVLine, but the site reports that ABC's Castle will not.

That's odd, for a show that's a fan favorite, performs pretty well for ABC, and of course has comic books based on it--and recently featured a guest appearance by a Marvel superhero on its live-action series.

But it's as much of an explanation as fans are likely to get. Meanwhile, the site also reported in its weekly spoiler session that information on the upcoming season is pretty tightly wrapped up, saying only that it will pick up "pretty much where last season left off."

Castle Won't Be at Comic-Con, But Nathan Fillion Will