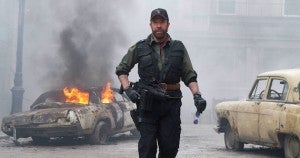 There's got to be a Chuck Norris joke for this occasion.

Legendary action and martial arts film star Chuck Norris said in an interview with Access Hollywood last night that he won't be returning for any future installments of The Expendables, putting a positive spin on the experience but causing some to question whether his personal views (Norris is a religious conservative who reportedly fought unsuccessfully to have the film rated PG-13 and some of what he called the "vulgar" dialogue removed) have caused him to jump ship.

"Nope. Just number 2. This is it for me." said Norris when asked whether he would return for more. "Oh, yeah. This is very special. Just to be able to do the film with guys I've known for many, many years. To get a chance to get in and fight with them, it was a lot of fun. Plus getting a chance to meet Terry Crews, who I hadn't met before. And Jason Statham, whom I hadn't met before. It was fun just to do that."

The Expendables 2 hit theaters over the weekend, and writer/star Sylvester Stallone has already been discussing the prospects for a third film with the media. Meanwhile Lionsgate, the studio who distributed the first two films, has discussed the possibility of bringing the series to the small screen as a television project. The studio has also discussed bringing the comic book adaptation RED into its TV library, and intimated that other Lionsgate properties (which include The Hunger Games and Twilight) might get similar treatment down the road.

Of course, the big-name, big-money cast of The Expendables is unlikely to appear in any prospective television adaptation--but what about a cameo by Walker, Texas Ranger in an episode? A guy can dream....

Avatar: The Last Airbender Creates Ruckus After a Curious Glacier is Found IRL

This Pokemon Bread Loaf is the Very Best