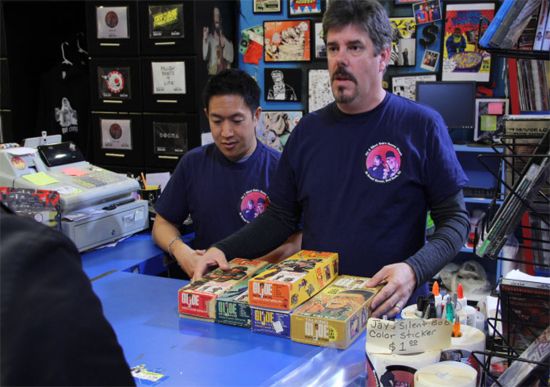 Last week, the Comic Book Men got made up as zombies for a special promotional idea developed by Ming. Unfortunately, the promotion didn't seem to bring any new buyers into the Secret Stash comic book store. Tonight's episode of Comic Book Men has the episode title of "Con Gone Wrong." AMC's description of the episode says, "Walt and the guys take a road trip to a convention in the area. After a major setback, the guys end up finding a literal treasure in the trash." It will be interesting to see the guys get out of the comic book shop for a change of pace. When they previously set up shop at the local flea market, it turned out to be one of the funnier segments on the show, so hopefully the con trip will be similar. AMC released a promotional sneak peek image for the episode, but it doesn't show anything from the convention. The promotional image shows Ming Chen and Michael Zapcic looking at a collection of GI Joe toys. The Comic Book Men Con Gone Wrong episode airs Sunday, March 11, 2012 at 10 PM ET on AMC.