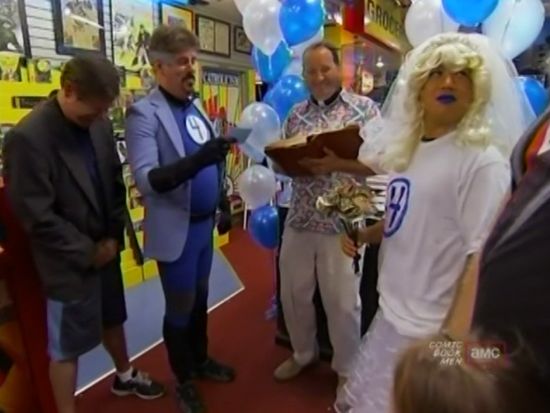 This week’s episode of Comic Book Men was entitled “My Big Fat Geek Wedding.” The episode kicked off with a valuable lesson: smoking and comic books don’t mix. A man entered the Secret Stash with five long boxes of comic books, thinking he was going to get five grand for them. However, the bags were yellow, and the comics smelled of smoke. Because of the cigar smoke damage, Walt was only able to offer $500 for the whole lot of comics, which the seller didn’t take.

After the smoking lesson, Walt stumbled across a newspaper ad for a public auction for comic books, toys, and posters. Walt and Bryan challenged Mike and Ming to an auction battle to see who could make the most money buying stuff. The losing couple would have to reenact the wedding of Mr. Fantastic and the Invisible Girl from Fantastic Four Annual #3.

After a heated auction competition, Walt and Brian were selected as the winners, so Ming and Mike were forced to reenact the wedding or Reed Richards and Sue Storm. The wedding was held at the Secret Stash, as a crowd of onlookers watched. Ming played the part of Invisible Girl, wearing blue lipstick and a white wedding dress. Mike played the part of Mr. Fantastic, reciting the vow, “Sue, I promise to shake the Baxter Buildings' foundation with thrice nightly cosmic lovemaking.”