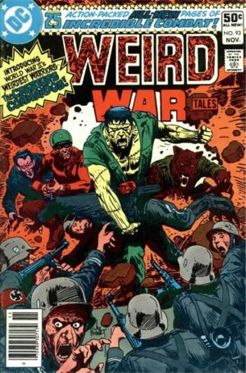 recently published our list of the top ten comic book war heroes. Now, we decided to take a different approach and look at some of the weirdest war heroes in comic books. None of these warriors or groups ever reached the popularity level of the members of our top ten comic book war heroes list, but they provided for some very unusual and entertaining stories. The Creature Commandos – You team up a werewolf, a vampire, and a Frankenstein monster and you have the makings of a great comic book. You take that werewolf, that vampire, that Frankenstein monster, throw in a chick with Medusa type hair, and you put them in a war setting and you have the makings of an awesome comic book. I mean, what could possible be better than monsters with guns? The Creature Commandos made their debut in Weird War Tales #93, and they were led by an ordinary human named Lt. Matthew Shrieve. Why a bunch of kick-ass monsters would need a human to lead them beats me. Later on, The Creature Commandos added a robot to their team, but more on that later. In the modern era, the Creature Commandos have been brought back as a special operations force. The original creatures had extended lives, but their human leader Lt. Shrieve died. Told you they didn’t need him. The modern Creature Commandos also added a mummy, an amphibian creature, a cyborg, and a seventy-four year old hunter. Say what! Which one of those doesn’t belong? 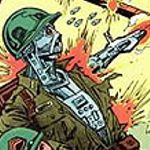 G.I. Robot – Speaking of robots, the G.I. Robot that became part of the Creature Commandos had his own adventures. G.I. Robot was actually a series of robots that started out with a robot named Joe, followed by a robot named Mac, then robots named J.A.K.E. 1, J.A.K.E. 2, and J.A.K.E.. #6.1. J.A.K.E. stands for Jungle Automatic Killer Experimental, if you have to ask. Who knows if there were J.A.K.E.’s 3 through 5 with untold stories? In addition to fighting in World War II, G.I. Robot also fought against dinosaurs on Dinosaur Island. Just think, in modern day comics, we’re stuck with troubled teenage mutants and over-the-hill superheroes who get killed off and come back to life every other week, but in the good ole days of comics, there were military robots that teamed up with monsters and fought dinosaurs. Kind of makes me want to walk right past the new comic section and dig in the quarter bins at the next comic book convention. 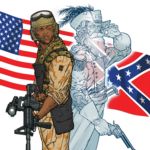 The Haunted Tank – Why no one has ever made this into a movie I will never know. So, here’s the story. The spirit of Alexander the Great sends the ghost of 19th-century Confederate general J.E.B. Stuart to watch over a Lieutenant, his tank, and his tank crew in World War II. The Lieutenant is a descendant of the general named Jeb Stuart and the tank is a Light Tank M3 Stuart. What’s more, Lieutenant Jeb is the only one that can see or hear the Confederate general ghost, so his tank crew thinks he’s crazy, but they follow him anyway because of his expertise. If I was in a tank and my commanding officer told me he was taking direction from the ghost of a Confederate general, then I think I would be finding another tank to get in. Wait, it gets better. In order to honor the ghost, Jeb flies a Confederate flag on his tank. Here’s the kicker though. In order to add more diversity, an African American named Gus Gray was eventually added to the tank crew. So, you see, there’s this World War II tank, flying a confederate flag, with a black guy inside, that is haunted by the ghost of a Confederate war general. Talk about the most politically incorrect comic book ever. Did someone at DC Comics point out how offensive it might be for the tank to be flying a Confederate flag and then think they could make things alright by sticking a black man inside? Think it can’t get any better. The Haunted Tank was updated in 2008 for the Iraqi War. In the updated version, the ghost of Confederate general J.E.B. Stuart is back, but this time he’s helping out another descendant of his. This new descendant happens to be African American.