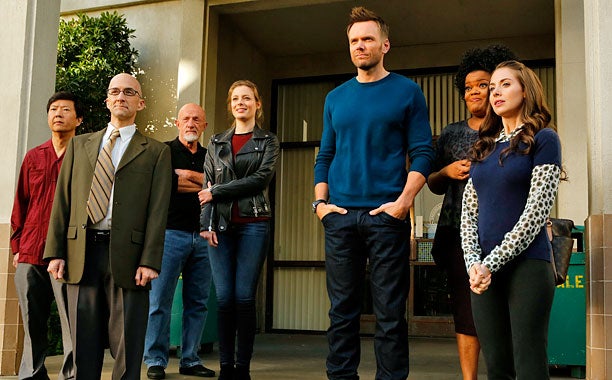 The years-long #SixSeasonsAndAMovie hashtag campaign is one step closer to being a reality, as Sony and NBC's cancelled cult-hit sitcom Community has been resurrected at Yahoo!

Creator Dan Harmon and cast members Joel McHale, Gillian Jacobs, Danny Pudi, Alison Brie, Yvette Nicole Brown, Jim Rash, and Ken Jeong have all signed on for Season 6, which will debut in the fall, according to Yahoo!

Missing from that equation, of course, are Donald Glover, whose character was written off halfway through season five so that he could work on his music career; and Jonathan Banks (pictured above with the rest of the cast), who replaced Chevy Chase as the resident quirky senior citizen.

"I am very pleased that Community will be returning for its predestined sixth season on Yahoo," Harmon said in a statement. "I look forward to bringing our beloved NBC sitcom to a larger audience by moving it online. I vow to dominate our new competition. Rest easy, Big Bang Theory. Look out,BangBus!"

Yahoo! lags behind other web giants like Amazon and Hulu in original digital content, so the arguments made for Hulu to pick up a show like Community are doubly true for Yahoo!, who can not make the veteran sitcom a focus of its fall programming slate and, presumably, have a Comic Con International: San Diego panel as well.

"'The reports of our cancellation have been greatly exaggerated,'" series star Joel McHale said, attributing the quote to Mark Twain, joking that the other version of this quote has been wrong for years. "#SixSeasonsAndaMovie is real. Thank you Sony. Thank you Yahoo. Thank you Dan Harmon. And thank you to the greatest f%$#ing fans in the history of the human race. It's the internet. We can swear now."

Community Will Gets Its Sixth Season on Yahoo! Will It Get a Movie?